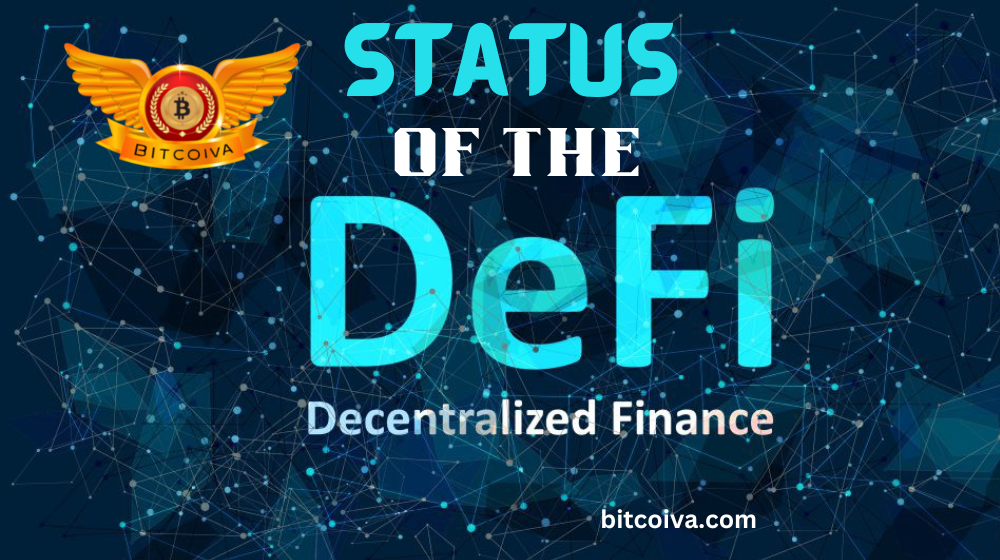 DeFi is the abbreviation of “decentralised finance.” It differs from conventional financial systems in that it doesn’t require official identification documents or financial intermediaries (such as banks, insurance firms, stock exchanges, etc.) to perform transactions like trading, mortgage lending, or insurance payouts. DeFi employs blockchain technology to address the identity identification process and rising costs brought on by transaction fees to intermediaries, two major issues in traditional financial systems. New financial solutions have been created using this technology and are now in high demand. In this post, we’ll discuss the status of the DeFi industry.

The development of Decentralized Finance (DeFi) has completely revolutionized the cryptocurrency market.

The plot originated in a hypothetical thought experiment posted on Reddit in 2016 by user u/v buterin, who is now well recognized as Vitalik Buterin, the co-founder of Ethereum. He put forth the concept of running prediction market-like on-chain decentralised exchanges in the manner of on-chain automated market makers. As a result, a decentralised financial system based on blockchain technology was developed.

Since then, the DeFi industry has expanded rapidly to create a thriving, multi-billion dollar ecosystem full of possibilities. DeFi had amassed a staggering $247.96 billion in total value locked (TVL) across various blockchain ecosystems and applications at its height in December 2021. The DeFi space has suffered significantly, with TVL falling to a low of $67.46 billion in June 2022 as a result of all the macroeconomic uncertainties, geopolitical tensions, increase in DeFi hacks and exploitations, general market downturn, and increasingly pessimistic outlook due to recent events (collapse of Terra, 3AC, Celsius).

This raises the query Is DeFi no longer alive?

Now, answering this question is difficult. If we respond too quickly with a yes or a no, we risk coming across as web3 maxis. Those who are living in denial and underestimating how powerful and active this market actually is, how much it has already been through simply to exist. Adding on how much more it has yet to develop and expand.

Therefore, the middle position is the optimum one. DeFi is by no means completely dead. But continuing along the same route that resulted in the market cap collapse . And TVL drain won’t do this sector any favors at all.

DeFi must resurrect from the remains of earlier cycles. We will begin by taking a thorough look at the past in order to influence our decisions about the future.

Uniswap, Maker Protocol, and Compound stood out among the first few explorers to seek out undiscovered territory from the dismal cold of the crypto winter. These initiatives share the goal of developing a decentralised, trustless financial system that is unwavering in its capabilities and efficiency, censorship-resistant, and economically inclusive.

The concept of trustless digital asset exchanges, stablecoins, and crypto loans became a reality with the help of this trio of decentralised services. DeFilLlama claims that by June 2019, these protocols had gathered a startling total of close to $500 million, which was an amazing achievement at the time.

Having said that, there were only a few smart contracts active on the Ethereum blockchain back then, and the concept of decentralised finance was not really a reality.

As a glimpse into the rosy future of a decentralised financial system, the term “DeFi” extensively bandied about. With the launch of Uniswap in November 2018, the significant move toward constructing DeFi really got under way.

Uniswap, the On-Chain Automated Market maker, And The Birth of DeFi

The goal of Uniswap V1 was to give users an interface via which they could easily exchange ERC20 tokens on Ethereum. It effectively allowed Uniswap to build a safe and secure mechanism for users to trustlessly trade their digital assets . Where they can trade without a centralised custodian thanks to its core focus on decentralisation, censorship resistance, and security.

The Uniswap protocol’s code is completely open source and there is no preferential treatment for early investors, adopters, or developers. No governance tokens or platform fees as it created public utility to advance the industry.

The decision to make the Uniswap protocol’s code completely open source has undoubtedly influenced the decentralised exchanges that exist today across a variety of blockchain networks.

Introducing the Maker Protocol and DAI, the First Decentralised Stablecoin

The first decentralised collateralized stablecoin, DAI, created and enabled anyone using the Maker Protocol platform . And this collateralized against digital currencies like ETH and BTC.

The demand for stablecoins was obvious given that the market value of cryptocurrencies often shown significant fluctuation. However, the only market products available at the time were centralised stablecoins backed by centralised parties’ assets. In which they were subject to custodial and regulatory issues.

The DAI upheld the original principles of the cryptocurrency industry—censorship-resistance and decentralization. And the product market fit for it was obvious in a decentralised economy.

As arbitrageurs suspended operations due to network congestion, there weren’t enough liquidators bidding on liquidatable collateral at the same time. Laterthe DAI depegged from its dollar peg and the price of MKR fell. It was a sharp fall by more than 50% on the same day. And this soon created stability difficulties.

The MakerDAO community advocated adding USDC, a centralised stablecoin supported by Coinbase’s Circle, as a collateral to mint DAI in an effort to save the DAI stablecoin. This would increase the protocol’s and the stablecoin’s stability.

ETHLend has its drawbacks because the entire loan and borrowing procedure was very difficult for users to use. Lenders expect to post, monitor, and oversee active loans and loan offers as part of the peer-to-peer protocol. Since loans had to be personally funded, the entire procedure frequently was drawn out and cumbersome. Participants on the platform also came from various timezones around the world, which further complicated the situation. This was obviously not the future of finance, if DeFi was.

Pushing the Limits of DeFi Lending with Aave (ETHLend) & Compound

ETHLend, the first decentralised lending marketplace on Ethereum introduced in 2017. The platform, connected private lenders and borrowers who wished to engage in collateralized loan arrangements in a secure manner.

The network used smart contracts on Ethereum to store user cash and their collaterals. So that to conduct P2P lending arrangements. And also ensuring its security and trustworthiness. The platform allowed traders to leverage or short crypto assets. While consumers and companies could access cash flow and liquidity without having to liquidate their underlying collateral.

Compound debuted its algorithmic and autonomous money market protocol on Ethereum in September 2018. It enabled anyone to borrow or earn interest on cryptocurrencies frictionlessly and without dealing with a third party. The advent of Compound’s peer-to-contract design and dynamic borrowing interest rates was what set it apart.

Lenders and borrowers did not communicate with other users. Instead, they only dealt with a lending pool, a smart contract reserve made up of user-pooled assets. Each loan and borrowing market generates a supply and borrow rate automatically, which fluctuates as market conditions change.

As a result, Compound is able to provide lenders and borrowers effective interest rates that respond to market circumstances.

Instead of requiring borrowers to negotiate a loan maturity and borrowing rate with a traditional credit middleman. Compound redesigned this service in a trustless and automated way to make lending available to everyone while also enabling lenders to earn interest on their crypto assets.

With the pool-based concept, loan positions could be opened indefinitely because the lender received interest on the assets they provided. And while the borrower paid a borrow rate. The loan-to-value (LTV) mechanism, a statistic to gauge a loan position’s liquidation threshold, balances this dynamic.

Compound played a significant role in developing the algorithmic on-chain money market protocol design in the decentralised economy as the protocol is an entirely open-sourced.

After learning from Compound and abandoning the P2P lending model, ETHLend later changed the name of the platform to become the well-known Aave Protocol.

Since then, the protocol has undergone two modifications, becoming Aave V3.

Uniswap, MakerDAO, Aave, and Compound were setting the groundwork for the entire DeFi business to come. Though they may not have been aware of it at the time. As well as opening the door for many more well-known brands that we are familiar with today.

In reality, the years 2020 and 2021 significantly affected the emerging sector. As many major brands began expanding the definition of DeFi beyond what was initially envisioned only a few years earlier.