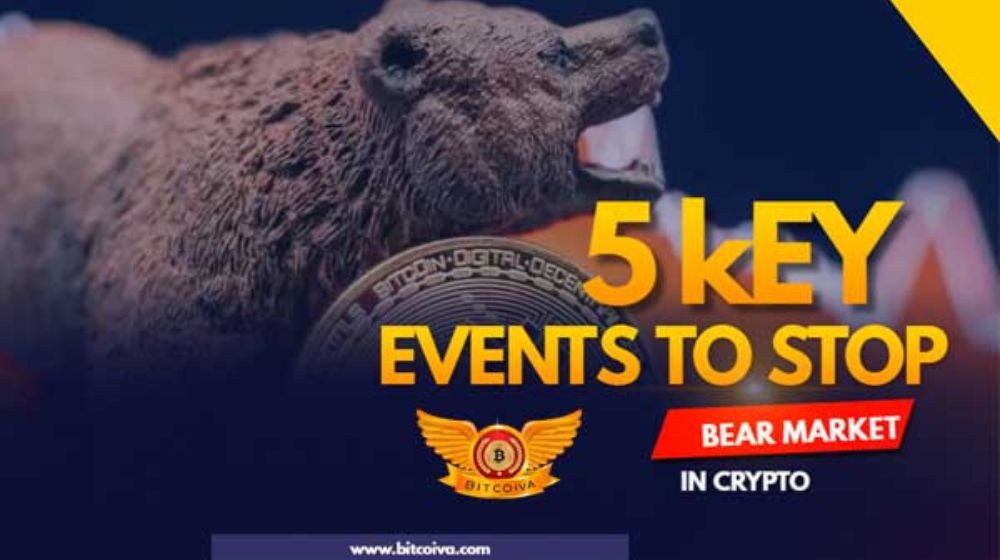 The crypto bear market has officially begun, much to the dismay of cryptocurrency investors around the ecosystem, and it has brought with it terrible price declines that have left virtually few unharmed.

With bearish forecasts of how low Bitcoin (BTC) will fall and how long this iteration of the crypto winter will last currently dominating the conversation, those with more expertise in the subject are aware that it is essentially impossible to predict the bottom and that it would be wise to focus those energies elsewhere.

It could be more fruitful to consider what circumstances can enable the market to emerge from the depths of the bear market and move toward its next up cycle rather than focused on when the end will come.

Here are five possible catalysts that could rescue the cryptocurrency market from its present slump.

The current switchover of the Ethereum network from proof-of-work to proof-of-stake has been one of the most eagerly awaited breakthroughs of the past five years.

The official switch is now closer than ever thanks to the successful conclusion of the Merge trial on the open test network Sepolia, even though the process has been protracted and has encountered multiple failures.

Should the merger go down without a hitch, it’s likely that the growing excitement surrounding it may help lift the cryptocurrency market out of its gloomy state, especially if it results in more scalability and a speedier user experience. The Merge is currently scheduled to occur in August 2022.

It should be noted that a successful merger could also result in an event along the lines of “buy the rumour, sell the news,” where prices briefly rise as a result of the excitement of crypto investors, only to drop back down once the dire state of the world’s financial system is once again brought to light.

The Acceptance of a Spot Bitcoin ETF

The approval of a spot Bitcoin exchange-traded fund (ETF) for American markets is another development that has been long predicted to ignite a crypto renaissance.

Every physically-backed Bitcoin ETF plan that has been put out has been rejected by the U.S. Securities and Exchange Commission (SEC) since 2017, when the Winklevoss twins’ initial BTC ETF proposal was rejected.

The accusation that cryptocurrency markets are easily manipulated and do not have the necessary safeguards in place to protect investors is frequently the basis for rejection.

This long-standing argument would be moot if a spot ETF were approved, adding new credibility to Bitcoin and the crypto asset class as a whole. As new money enters the market, this may signal the beginning of a new wave of institutional adoption and signal the end of the crypto winter.

The Fed Changes its Strategy

Investors frequently use the phrase “don’t fight the Fed” to describe one of the most powerful forces on the world’s financial markets. The U.S. Federal Reserve approved an interest rate increase of 0.25%, the first increase in more than three years, after several years of loose money policies and low interest rates.

Risk assets have been depreciating throughout the same time period, with Bitcoin’s price decreasing from $48,000 at the end of March to its present level, which is trading close to support at $20,000.

It’s quite likely that a return to the Fed’s easy money policies would cause money to flood back into the crypto ecosystem after the unprecedented spike in the cryptocurrency and legacy markets that was observed in 2021.

Significant Use of Bitcoin as Money

El Salvador became the first nation in the world to accept Bitcoin as legal money in 2021, making it available to its residents. The Central African Republic (CAR) became the second nation to do so in April 2022, indicating a rising trend.

Though the adoption of BTC by El Salvador and the CAR is reason for celebration, it hasn’t done much to further more widespread acceptance, despite the fact that using it as legal cash has long been an aim of cryptocurrency supporters.

However, if a larger market, like Japan or Germany, were to open up to formally supporting BTC use by their residents for everyday purchases that is likely to change.

It’s not out of the question that a larger economy could use Bitcoin as a last resort currency as fiat currencies continue to lose purchasing power in light of recent events on the global stage, such as conflicts and food shortages, which are forcing governments to take actions they never considered.