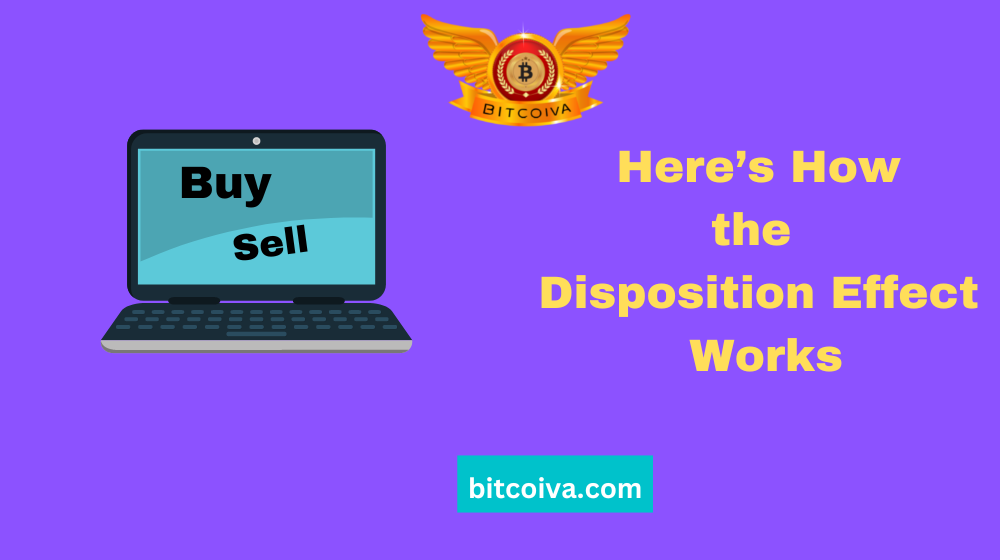 The term “the disposition effect” was first used by Hersh Shefrin and Meir Statman in their 1985 work to refer to investors’ propensity to sell winnings too soon and hold onto losers for an excessively lengthy period of time.

The disposition effect has affected you if you’ve ever sold a position way too soon despite the substantial upward potential that remained or retained an asset with virtually no prospect of rebounding.

How Does The Disposition Effect’s Work

Most people are extremely loss-averse by nature. This implies that victories have a greater positive influence than defeats do.

To put this into perspective, the displeasure of losing $100 is much greater than the psychological impact of winning the same amount. The fact that an organism on the verge of extinction wouldn’t risk losing a day’s worth of food for the prospect of gaining twice as much offers evolutionary advantages.

Prospect theory explains why people tend to favour decisions that could potentially lead to profits and avoid those that might lead to losses. For example, if a person had to select between the two options listed below:

Despite the fact that the economic outcome of both options is almost equal, they overwhelmingly prefer option B because it has a guaranteed victory rate.

Applying this to cryptocurrency trading, an investor will find it simpler to exit at a guaranteed profit than to risk their portfolio for a higher profit once they have established a position in a cryptocurrency. This also explains why people frequently baulk at working overtime or switching to a higher-paying position out of concern about having to pay more in taxes.

Additionally, we are very “regret averse.” We detest the regret that frequently forces us to make conservative decisions, like selling a cryptocurrency that has increased 20% over-night despite having the potential to increase greatly in value over time.

This is made worse by the fact that, even when two things are identical, humans have a tendency to place a larger value on things they already own than on those they do not. Such that even when the same chair is available elsewhere for $1,000, the owner of a $1,000 chair could be reluctant to sell it for $1,100.

The market exhibits “a reverse disposition effect in bullish periods and the usual positive disposition impact in bearish ones,” according to a recent paper by Steven Haryanto and Athor Subroto. In other words, during bull markets, investors cling onto their winnings too long, whereas during bad markets, they tend to sell them off too soon.

The disposition effect explains why many cryptocurrency investors bought Bitcoin (BTC) well below its peak in 2021 and have kept it even after it fell by 70%. In the same way, it explains why few (or possibly none) traders were able to profit from Shiba Inu’s explosive 25 million percent gain in 2021 because they sold way too early.

How to Reduce the Effect of Disposition

Unfortunately, most traders tend to manually quit their positions at the wrong time or too early when they are left to their own devices.

Dacey and Zielonka assert that the exception to this rule happens during periods of high volatility, when investors are more inclined to liquidate a losing investment than they are during periods of relative calm.

The disposition effect is deeply ingrained in human nature, making correction challenging but not impossible. You can use a variety of tactics to give yourself the best possibility of getting out of positions at a time when it makes more sense.

If you’re anything like the majority of traders, you probably manage your trades individually. While when done correctly, this can be highly effective, it frequently leads traders to place too much stock in the results of a single deal.

This may give the transaction outcome more weight than it deserves. When in fact the trade is really a minor component of a broader scheme. You may view it for what it truly is — just a part of the plan — if you turn the paradigm on its head and instead concentrate on the greater picture. This method is referred to as broad framing.

Your cryptocurrency investment approach aims to generate a sizable total profit rather than concentrating on several smaller ones. By taking this perspective on your finances, you might be less likely to make snap decisions.

People are very emotional. The stock market and cryptocurrency are not, however, an investor’s deadliest opponent; rather, it is his own emotions.

Only because investors become irrationally or emotionally connected to their investments does the disposition effect take effect. This can be difficult to overcome, but it can be made much easier by consciously eliminating emotion from the process through automation.

This may compel you to follow through with the plan, regardless of how you feel about it.

Make Use of Abstraction

We frequently discover that giving advice is simpler than taking it. But in this instance, abstraction strategies can help you view your problem from a fresh angle and may even aid in your decision-making.

Let’s say you are holding onto a coin with no actual probability of going up in value. Even though it’s clear that the price of cryptocurrencies will undoubtedly keep falling for the foreseeable future, you can’t bring yourself to sell your holdings and book your losses. How about you? Remove yourself from the situation and consider it from a distance. What would you tell a friend or member of your family who was in your shoes?

You might be shocked to learn that you would suggest someone do the exact opposite of what you want to do. And if that’s the case, consider your own advice; it just might save you from avoidable losses or missed opportunities.