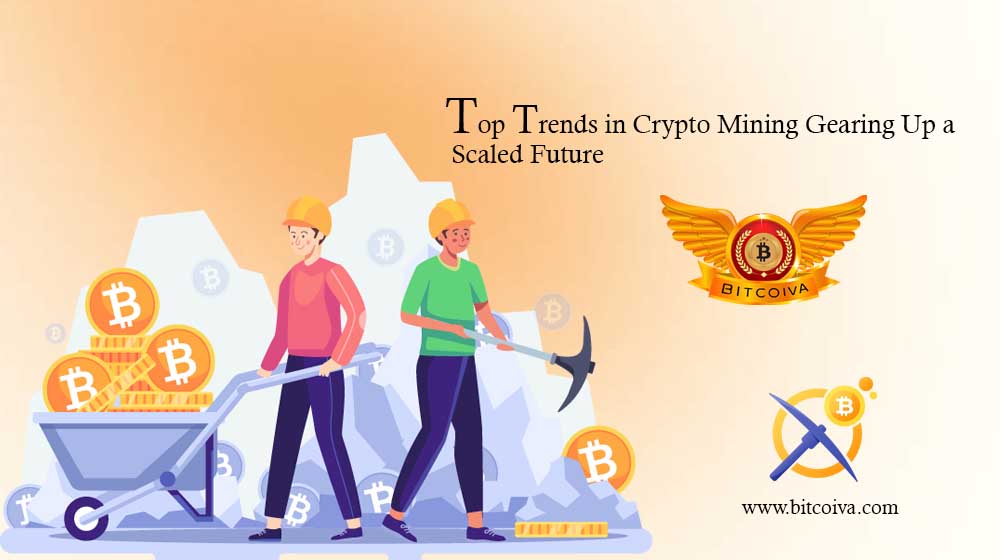 Trends Remain a main factor in determining the future of any industry. People mined Bitcoin using laptops when it initially started in 2009. We were unaware that we would need to give consideration to issues like maximizing operating efficiency in sizable data centers, hardware vendors, and large-scale energy consumption. Trial and error, however, gave opportunities to learn and develop fresh ideas to support the industry’s expansion as Bitcoin mining increased and scaled. Although 2022 has been a difficult year for Bitcoin and the cryptocurrency sector in general, the mining sector is still expanding. The top trends in crypto mining demonstrate how the Bitcoin mining sector is leveraging its prior knowledge and expertise and gearing up for a scaled future.

What Is Crypto Mining?

New digital “coins” produced through the process of mining cryptocurrencies. But that is the extent of simplicity. In order to locate these coins, it is necessary to solve challenging riddles, authenticate bitcoin transactions on a blockchain network, and add them to a distributed ledger.

How Does Crypto Mining Works?

Bitcoin miners must initially invest in computers with mining-specific hardware, and they frequently need access to a cheap energy supply.

A “block” of bitcoin transactions that need confirmed is a grouping of those transactions. Like the links in any chain, the blockchain made up of blocks that assembled in a specific order. The distinction in this case is that each block contains data on the origin and destination of each transaction’s bitcoin. As a result, the integrity and verification of every block before and after a given block are equally crucial.

Miners must labour to verify a hash, which is a set of cryptographic rules (complex mathematical functions) that included with each block. Additionally, these regulations make it very difficult for anyone to manipulate the blockchain or add or remove blocks in a dishonest manner.

A hash is a mathematical operation that creates a one-of-a-kind code identifying a file. Similar to a fingerprint, it cannot be copied but can used to identify a file. 5 To check if a file has been modified, hashes utilised.

In order to prevent block manipulation and ensure the accuracy of the transaction chain, hashes utilised in bitcoin mining. In order to guess these hashes and process bitcoin transactions, bitcoin miners compete to accomplish difficult mathematical operations.

The speed at which a miner’s computer setup can solve mathematical equations known as hashrate. Because the first miner to demonstrate that they have completed the “work” of solving a challenging equation granted the ability to process the most recent block of Bitcoin transactions, this mining system known as proof of work. Bitcoin given to successful miners in addition to a transaction fee. A successful miner would receive 6.25 bitcoin as payment as of June 2022.

A fresh block of transactions is released to all other miners and any other device that has a full copy of the Bitcoin blockchain after a miner successfully confirms it. (These objects are referred to as nodes.)

A reliable, verified history that is nearly impossible to hack or falsify created and maintained by numerous computers across the world maintaining identical copies of the blockchain.

The Top Trends in Crypto Mining that Modifies it

Next year, as competition heats up, some miners may start to squeeze margins, raising the possibility of mergers and acquisitions. As a result, new patterns in cryptocurrency mining are emerging.

The hash rate for the bitcoin network will significantly rise in the upcoming year. Some predictions state that the quantity of miners entering the network will double. The amount of computational power required to carry out cryptographic mining operations and protect the bitcoin blockchain measured by the hash rate. It is also a crucial measure of competition.

Miners will need to work harder to remain profitable as the hash rate and difficulty rise unless there are significant ups and downs in the price of bitcoin.

According to Gryphon’s Chang, if their “high end scenario” of 300 EH/s materialises, “the effective doubling of the worldwide hashrates would mean that mining incentives will slashed in half.”

Companies that can keep their costs low and use effective machinery will survive and prosper as competition eats away at the large margins enjoyed by miners.

An Increase in Mergers and Acquisitions

According to Thiel of Marathon, this stability will rise until the middle of 2022 and beyond. He also anticipates that Marathon, a well-funded company that has raised approximately 700 million, would expand significantly in the ensuing year. It can entail adding smaller players or maintaining your hash rate investment.

Small miners who are unable to keep up with the huge and well-capitalized firms as winners and losers of the hash rate wars develop.

The ability to purchase electricity at a reasonable price has always been a crucial element of successful cryptocurrency mining operations. But in order to maintain a competitive edge over the long term, securing renewable energy sources is becoming increasingly important as environmental criticism of the effects of crypto mining intensifies.

At the moment, miners are leaning toward employing technologies like immersion cooling to boost productivity and lower mining expenses without buying more computers.

A discussion of supply chain problems is necessary to fully discuss the prognosis for dishonest miners. These problems have been a major hindrance to the industry this year and are probably going to get worse by 2022. The global chip shortage has impacted 169 industries, from the auto industry to the soap industry, and is being driven by the implications of CoVID-19 on global trade as well as rising geopolitical tensions between the United States and China.

Michael Stoltzner, a bitcoin miner and the CEO of Blockwide Mining Inc., said that before 2021, orders for mining rigs placed directly with manufacturers would arrive within two months. Only substantial orders have been confirmed, and the manufacturers’ order books are already completely full for 2022 and even 2023.

By making plans and figuring out the best approach to handle supply chain difficulties for miners who wish to expand production, cryptocurrency mining avoids these problems.