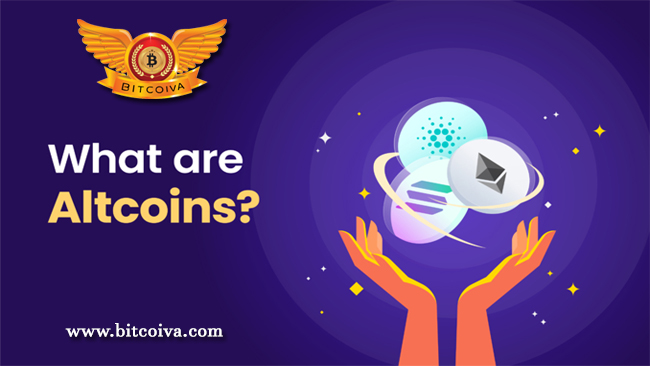 The crypto sector began in 2009, when the world was exposed to a decentralised token known as Bitcoin. More tokens followed, which were then collectively referred to as altcoins, as a result of numerous trials and efforts at offering answers to real-world issues. Thousands of other altcoins, or alternative coins, have been produced and added to the crypto ecosystem since then. Their innovation is an attempt to enhance Bitcoin by regulating elements such as the total amount of coins, confirmation time, and mining algorithm, among others.

WHAT EXACTLY ARE ALTCOINS?

To put it simply, altcoins are all cryptocurrencies other than Bitcoin. They were created in a similar blockchain framework in order to imitate the success story, and they too use a peer-to-peer mechanism. Altcoins, like Bitcoin, require a specialised mining process to allow users to conduct safe and secure online transactions. In general, the structure used to construct altcoins is similar to that used to develop Bitcoin, but with expanded functionality. These benefits include a more efficient mining operation and transactions that are cheaper or quicker. However, certain cryptocurrency qualities may overlap, but when compared to one another, they show different variances.

Despite the fact that Bitcoin currently competes with hundreds of altcoins, it has retained the top spot on the list. The cryptocurrency sector is rapidly evolving, with changes like as anonymity, instant transfers, and various proofs taking centre stage. Some of the most popular cryptocurrencies include Litecoin, OKCash, Dogecoin, and Zcash.

Ideally, the creation of Altcoins should be done for the aim of solving a specific problem rather than just collecting money and deviating from the path that other coins are taking. However, there are numerous cryptocurrencies that are functioning incredibly well in the markets. These include Neo, Ripple, Ether, and so on.

With the emergence of altcoins, many classifications emerged. Stablecoins, utility tokens, cryptocurrencies, and security tokens are all types of altcoins. A specific movement is used to separate the bulk of these hypotheses from cryptocurrencies. If the trend continues, it is predicted that altcoins will refer to only mining-dependent cryptocurrencies other than Bitcoin in the future.

These cryptocurrencies have a mining mechanism in place where new coins are generated by resolving difficult challenges in order to open and release blocks. When compared to other sorts of altcoins, they are quite similar to Bitcoin. The bulk of elite cryptocurrencies fall under this category at the start of 2020. During the month of February 2020, Ethereum was the most effective and well-known mining altcoin.

Stablecoins seek to improve on Bitcoin by reducing volatility. This is obtained by attempting to outperform the value of coins in current currencies. The US dollar, gold, and euro are examples of well-known possibilities for supporting cryptocurrencies. The most popular stablecoin is Facebook’s Libra, albeit it will not be available until after January 2020.

Not only are these cryptocurrencies associated with a business, but they also begin with an initial coin offering (ICO). Security tokens are supposed to be the same as traditional equities. Indeed, they typically guarantee certain types of rewards, such as payment or possession while trading.

Utility tokens grant access to services. They are also available as a component of an ICO. Filecoin is an excellent example of an ICO-provided utility token. Filecoins are designed to be interchangeable in central and distributed file storage regions.

Since 2021, there has been an increase in the number of crypto assets with devoted communities, known as Meme Tokens. For instance, Shiba Inu or Dogecoin. When these currencies were first released, they didn’t have a substantial role to play other than a little push from famous individuals like Elon Musk and others.

WHAT IS THE IMPORTANCE OF ALTCOINS?

Any investor who understands the concept of diversity and variation is aware that they are progressive tools. There’s a phrase about avoiding placing all logic in Microcode, which is a huge piece of financial advice. Customizing your investments through a bag that includes assets such as bonds, stocks, cryptocurrencies, and cash is crucial for lowering risks and gaining the advantage of several opportunities for triumph.

When you turn out miscellaneous in one’s investments, the impact of failure of anyone’s asset is reduced. This even allows investors to acquire control over risks. We understand the importance of various investment dossiers. Making money using bitcoin is not easy to do. As a crypto investor, you may choose to reduce your risk profile by investing in government analytics and other low-risk options. In general, all types of investments with assets accumulated at a risk level where you are content and comfortable will be proclaimed in your paradigm dossier. It is not a good idea to store all of your assets in the form of cash.