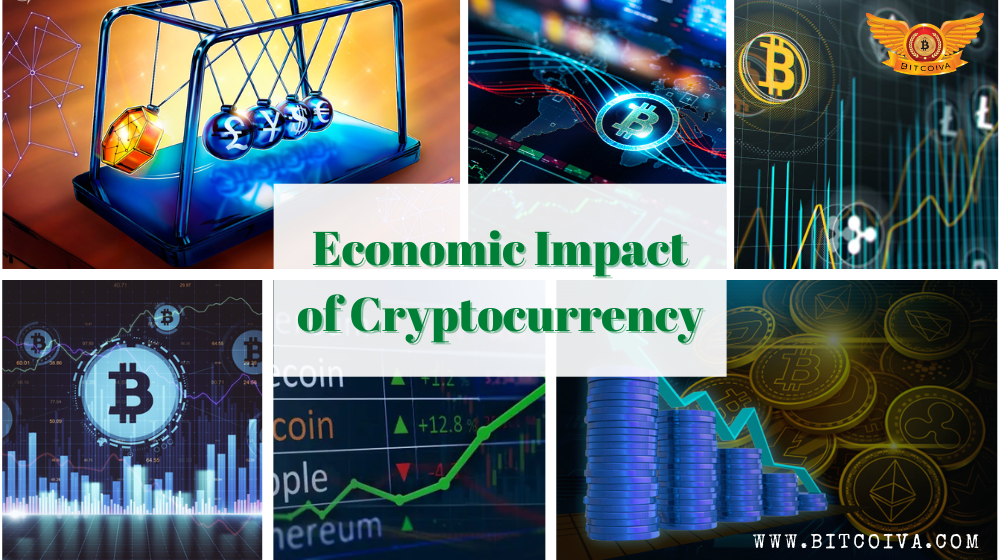 As the name implies, digital currencies, or cryptocurrencies, have been continuously developing over the past few years and is bringing more and more changes to worlds economy. These currencies can only be found through an encryption process that uses sophisticated mathematical procedures. They are kept in “wallets,” which are digital storage spaces “. Lets discuss about the Economic Impact of Cryptocurrency

What Exactly is Cryptocurrency?

Digital money that is usually decentralised and created for online use is called cryptocurrency. Following their introduction, cryptocurrencies have expanded as electronic substitutes for fiat currency during the last ten years. People typically “purchase and sell” “one of the biggest cryptocurrency trading platforms, Binance, to trade in their currencies.

The quantity of bitcoins that may now be “extracted” from the internet is enormous and is constantly growing. The American social media behemoth Facebook, run by Mark Zuckerberg, has recently been linked to a new virtual currency called Libra, which is expected to significantly alter the value of the cryptocurrency market.

Bitcoin is without a doubt the most popular and widely used virtual currency today. Since its inception in 2009, it has grown in prominence and relevance across all facets of the online world. Additionally, its value has grown over time, even breaking the all-time high of $20,000 for Bitcoin in 2017.

With this cryptocurrency, it is now possible to purchase anything, make investments, trade stocks, and, regrettably, use it to illegally obtain any goods or services on the so-called Dark web.

The influence of cryptocurrencies on various facets of the national and international economies is evident. For instance, the 2017 cryptocurrency ICO bubble resulted in a flow of hundreds of billions of dollars into the sector. Cryptocurrency is the future, according to experts, and it may be invested in like a stock, more like precious metals.

The five main effects cryptocurrency will have on the Indian economy are as follows:

The ability to track every transaction back to its origin increases transparency thanks to cryptocurrencies. Blockchain, the technology on which cryptocurrencies are founded, is also unchangeable. As a result, transaction histories are unchangeable and irreversible. As the data cannot be changed in any way, this can considerably reduce corruption.

About 50,000 people are currently employed in the cryptocurrency sector. According to a survey, there will be a ton of job openings in the sector by 2030, with estimates of over 800,000. India already has a sizable skill pool of Fintech and IT specialists. The talent is moreover offered at reasonable prices. With the growth of the cryptocurrency sector, India has the potential to develop into a significant worldwide hub for the industry. In the BFSI, IT, customer support and service, as well as many other areas, this will assist generate a large number of job possibilities. Today’s bitcoin industry continues to contribute to raising the country’s employment rate.

Increase for the FinTech industry

As was already established, India has a sizable pool of IT specialists. Collaboration between the financial and IT sectors has the potential to provide countless commercial opportunities and foreign currency inflows. Furthermore, it will draw substantial international investments thanks to the government’s implementation of strict regulatory measures and the creation of regulations for an official digital currency. This will significantly strengthen the FinTech industry and advance the Indian economy.

Transactions with cryptocurrencies save time and money. The transactions are instantaneous since they are carried out directly between the sender and receiver without the involvement of a third party. Additionally, there are no longer any transaction fees assessed by middlemen like banks and payment gateways.

By lowering the transaction’s cost, this enables consumers to save money on each transaction. Therefore, cryptocurrency transactions can dramatically improve digital payments by reducing transaction time and cost.

The technology that defines cryptocurrencies, blockchain, is the first thing you would notice when determining how cryptocurrency can transform the world. According to several analysts, the technology may make it possible to unlock billions of dollars. What justifies assuming that blockchain technology used in cryptocurrencies will have an impact on the economy? The answer outlines the effects of blockchain business procedures on various global sectors.

You would first note how blockchain has made it possible for financial institutions to transact internationally. Additionally, the use of blockchain technology to guarantee accountability in financial transactions is another way that cryptocurrencies have an impact on the economy.