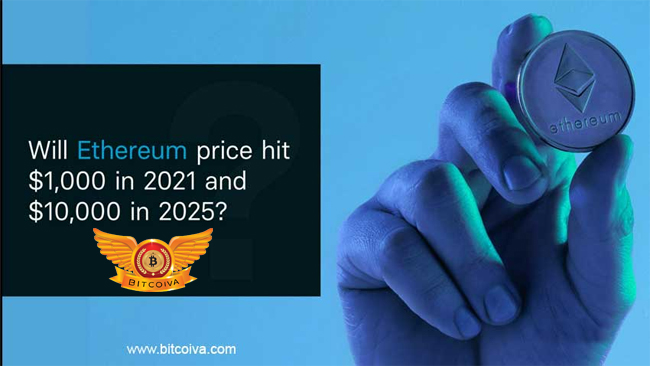 When measured by market cap, Ethereum ($ETH) is the second most valuable coin, and the Ethereum platform provides its users with a wide range of features. Unlike Bitcoin, which was intended simply for financial transactions, the Ethereum blockchain was intended to accomplish much more.

The Ethereum blockchain is significantly more complicated than Bitcoin’s. It allows third-party developers to establish their own currencies and sub-platforms on the network. This has resulted in a sharp increase in the popularity of Ethereum. But it has also caused problems for certain developers who have opted to invest in developing alternative blockchain systems. It implies that formulating an accurate Ethereum price forecast requires a comprehensive strategy.

ETH in a Nutshell

For the time being, ETH approves transactions and maintains the blockchain using a Proof-of-Work (PoW) approach similar to Bitcoin. With the introduction of ETH 2.0, this may change in the coming years. While the timetable for adopting the new Proof-of-Stake (PoS) mechanism has not well defined.

While the ETH token was not originally intended to be used exclusively as a currency. It has grown in popularity as a way of both savings and payment. Ethereum also offers a vibrant ecosystem, which is one of the most essential tools available to Decentralized Finance (DeFi) developers at the moment.

How has the ETH Price Performed in the Past?

ETH drifted flat for a year and a half after falling to double-digit values. During this period, the token appeared to limit at $250, but it also appeared to find buyers at the $100 level.

The $250 threshold breached on a large scale in July of 2020. In September of this year, ETH went as high as $475 before dropping down to test the breakthrough at $320. From there, ETH has climbed to over $600 in late 2020. And the token’s chart appears positive, as it has broken out of a multi-year trading range on large volume.

What Variables Influence the Price of Ethereum?

Ethereum – a complicated platform that impacts by a variety of variables. Because Ethereum’s blockchain designs to stimulate third-party development. New platforms that operate on the network can have a significant impact on the price of ETH tokens and platform transaction fees.

The DeFi explosion is one of the major factors that may have pushed ETH out of its trading range in the middle of 2020. While not all of these new DeFi platforms use ETH as a method of transaction. Many of them are based on the Ethereum blockchain. Which means that some ETH requires for the DeFi tokens or platforms to function.

The usage of Ethereum as a foundation for DeFi apps resulted in net demand for the token. This was plainly beneficial to the price.

Surprisingly, even after the DeFi bubble burst in the fall of 2020, ETH prices remained high. And trading volumes were larger than at the start of the year. All of this speaks to different sources of demand for the token, as well as a tenuous link between DeFi token and ETH values.

As the year 2020 progressed, demand for alternative assets increased. As the second most valued token behind Bitcoin, ETH has become a lucrative investment instrument for many institutional investors looking to enter the crypto markets.

While DeFi devs may not utilise ETH as money institutional investors are treating the token as digital gold. And they intend to retain it for the long term. Grayscale Investments, a renowned crypto investment firm, raised record sums of fresh investment funds in 2020, with a large portion of it going towards long-term ETH holdings. Grayscale’s investing model is not complicated. The business buys and operates as a custodian for client money. This means that huge investors are putting ETH in cold storage as a reserve asset. As the foundation of DeFi, fortime being, ETH is a critical component of a burgeoning global ecosystem.

It is difficult to overestimate the importance that DeFi might play in the financial landscape of the twenty-first century. And Ethereum’s blockchain is a critical component of the DeFi development field. While the platform’s popularity did have an impact on some apps that relied on cheap network costs to function. Many DeFi platforms would unaffected by somewhat increased transaction prices.

It is Difficult to Estimate How Ethereum may Rise

Lower DeFi token values, as market action in the latter half of 2020 has demonstrated, do not imply reduced demand for ETH. And as a new reserve currency for the larger financial world, ETH has built-in support that many DeFi systems lack.

With the present market capitalization of ETH, a $6,000 price would suggest a valuation of roughly $650 billion. This is relatively little when compared to a single business such as Apple or Alphabet. Of course, the possible applications for ETH’s blockchain go much beyond either of these two enterprises’ products or services.

Given ETH’s current low capitalization, the possibility of a rapid price increase at any time is extremely real. Mainstream payment networks are allowing crypto usage, and the infrastructure to utilise tokens like as ETH. It is difficult to estimate how far ETH prices may rise in the following years, but the trend is unmistakably upward.

Other Factors That Could Affect ETH’s Future

The Ethereum blockchain is about to undergo significant modifications. The ETH 2.0 project , now fully funded and will begin work on a project to transition from Proof-of-Work (PoW) to Proof-of-Stake (PoS) . When Ethereum developed, it employed the same method of block validation as Bitcoin, which is PoW.

A PoW system has certain significant shortcomings, which addresses by PoS.

Nobody knows what will happen when these changes implement. But they will entail a net gain in the quantity of ETH on the market. According to fresh estimations, the quantity of ETH that will add is at least 4 million tokens. The upgrade to ETH 2.0 is a gamble, but if successful, ETH will be the most competent public blockchain available.

Some of the most significant issues that a PoS system overcomes are the ability of bad actors to launch a 51 percent assault and the massive amount of energy required to run a PoW blockchain. There’s a lot more, but given the programs immaturity, it’s difficult to predict how they’ll be implemented or what consequences they’ll have.

PoS is a far superior method from the standpoint of an investor. Because the possession of a token becomes intrinsically valuable in a PoS system, there are many more options for passive revenue. Staking on a PoS platform is analogous to making an interest-bearing deposit. It is as significant stakers can receive benefits through their staked tokens.

Smaller stakeholders who do not actively engage in the validation process can still profit by engaging into fixed-payment smart contracts with a validator. This might be a more or less automated procedure for any ETH holder who is interested. Overall, ETH 2.0 might be a huge opportunity for digital investors, but no one knows how it will play out in the following years.