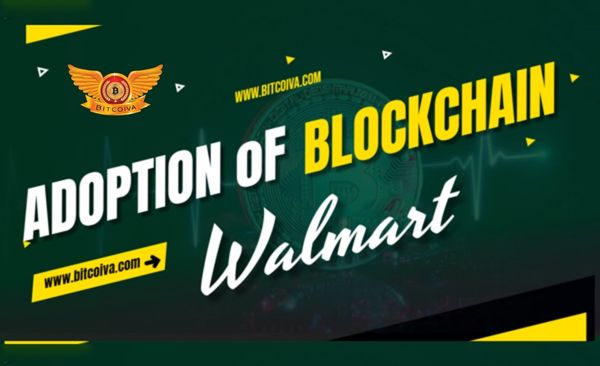 Since many industries have been using blockchain to fuel their operations, the food sector is no different. Blockchain Adoption in Walmart is one of the innovation of this latest idea. Customers want to know where their food comes from, and retailers need to be able to manage the supply chain and quickly spot foods that could potentially spread foodborne illnesses. When a foodborne disease outbreak occurs, everything becomes very risky for everyone involved. Food suppliers and merchants risk lawsuits, lost sales, and other financial losses. For regular consumers, things may result in serious health issues or even fatalities.

Blockchain technology provides a solution. While many people are still learning how to apply blockchain, American retail behemoth Walmart became a pioneer in doing so to advance its food safety procedures.

What Role Does Walmart Play

Walmart is an American global retail firm that owns and operates a network of supermarkets, cheap department stores, and hypermarkets. Approximately 60 of Walmart’s more than 11,000 stores and clubs run under various identities.

Workflow optimization made possible by the company’s continuous supply chain innovation and development. This has aided in their ability to lower costs, increase revenue, and lower prices. Undoubtedly, these elements have played a role in Walmart’s success. Walmart continues to make every effort to hold onto its position as the market leader and makes an effort to react to problems quickly.

Let’s define a food supply chain first. It summed up as every procedure involved in getting food from a farm or field to our tables. Each tile in the chain linked to the one before it, and they all depend on one another according to the domino theory. As a result, if one tile or supply chain link has a problem, the entire game impacted.

Products go along the food supply chain from the farmer to the consumer, passing through processors, wholesalers, and retailers. It is evident from examining food safety instances that traceability and transparency pose the biggest problems for conventional food chains.

The retailer cannot track a specific food item back to secondary and subsequent suppliers who connected to the farm, even if they know which source made it. Within the chain, data movement always adds complexity and delays.

Here are Some Potential Uses for Blockchain Technology

What if those supply chains used blockchain technology as their foundation? With the help of blockchain, tracing contaminated food would take just a few seconds as opposed to days, weeks, or months. The technology itself provides continuous, real-time product tracking, literally from farm to fork.

Furthermore, the suppliers required to add and store all the data in immutable blocks when employing blockchain solutions in place of paper-based ledgers. Because of the transparency of blockchain, all supply chain participants can view the data.

What’s the Origin of the Walmart Blockchain Story

A user showing off a tablet with a route map shown

The majority of conventional supply chains, including those that Walmart formerly ran, rely on the manual paper-based technique of information collection. Finding crucial data becomes quite time-consuming once required. The amount of information that businesses receive from suppliers and customers in countless locations gives them issues. Nobody has enough time or staff to handle every product or ingredient and run the processes swiftly and precisely.

Walmart worked to speed up the traceability procedure so they could respond quickly and spot compromised commodities more effectively.

Achieving these objectives would also contribute to health improvement and lifesaving. As a result, they tested and took into account blockchain technology. Food safety concerns and an antiquated supply chain system served as the starting points for the blockchain implementation tale, or to be more precise, the Walmart and IBM blockchain collaboration.

Rewind to 2016, when Frank Yiannas was the vice president of food safety at Walmart (he is now the deputy commissioner for food policy and response at the FDA). Frank Yiannas once said that the one-step-up and one-step-back concept of food traceability was out-of-date for the 21st century and also that their customers deserved a more transparent supply chain.

The issue is that other revolutionary methods that Walmart had previously tried never scaled in the end; the blockchain-based supply chain was not the very first innovation in the sector. Later, Yiannas understood that blockchain suggested a decentralised shared ledger that “was made for the food system,” whereas the earlier solutions implied centralized databases.

Karl Bedwell, a former senior director of Walmart Technology who is currently the chief information officer at Comprehensive Pharmacy Services, also mentioned that blockchain technology would be a viable choice because of its emphasis on immutability, transparency, and trust.

The Treasures Walmart is Taking to Learn Blockchain Technology

After initial mistrust subsided, Walmart started looking at the potential of using blockchain to improve supply networks. Frank Yiannas noted that the ultimate goal was transparency rather than traceability because the food system as a whole is a shared responsibility.

A shopper in a supermarket holding a smartphone with a QR code displayed Walmart teamed up with IBM and began to develop two proof of concept (POC) projects not long after confirming their commercial interest in blockchain. These two pilot projects attempted to trace the origin of mangoes sold in US stores and put pork on a blockchain in Walmart’s Chinese stores, respectively. Thus, in October 2016, construction on the Walmart blockchain tracking system began.

Mango and pork supply networks weren’t picked at random. China is the world’s most populous nation and also the largest producer and consumer of pork.

In China, there have been numerous food safety problems involving pork, and Walmart has also come under fire. For instance, the American behemoth accused of mislabeling regular pork as organic in 2011.

The firm established the Walmart Food Safety Collaboration Center in Beijing to improve food safety in China. Walmart partnered with IBM and Tsinghua University to enhance how food tracked, transported, and sold across the nation, according to Rebecca Lui, a representative for the company. They worked together to inject some originality into the supply chain.

Walmart intended to track these sliced fruits from South and Central America to the US and show cross-border transfer and responsibility because mangoes were frequently contaminated with Listeria and Salmonella. In addition to completing both projects, the American retailer wanted to boost public trust in supply-related information.

Work on the mango pilot started with Yiannas’s experiment when he bought a packet of sliced mangoes at a random Walmart shop nearby and ordered his team to determine their origin as soon as possible, as was reported in the Walmart blockchain case study. The crew started working right away, and seven days later they had a solution. Walmart, though, felt that it wasn’t quick enough.

Walmart successfully finished its trials by utilizing IBM’s blockchain solution, which was built on Hyperledger Fabric and tailored for the two products—mangoes and pork. The system’s legitimacy with relation to pork in China used to be a significant issue. The problem was no longer an issue with the implementation of a new solution that permitted the uploading of certificates of authenticity to the blockchain. Additionally, the time it took to track the origin of mangoes in the US was dramatically reduced, going from 7 days to 2.2 seconds. Thus, both pilot programmers’ objectives were met.