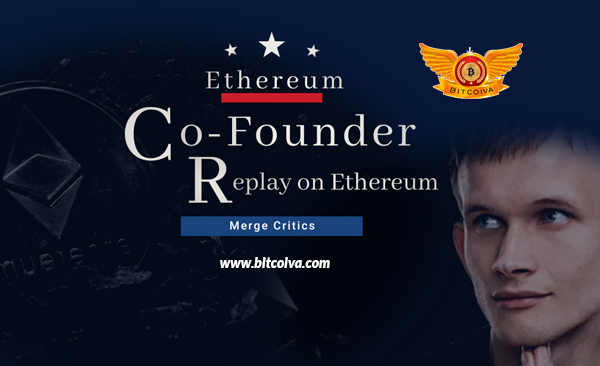 While some anticipate that the impending switch from proof-of-work (PoW) to proof-of-stake (PoS) would enable Ethereum to eventually exceed Bitcoin (BTC), others are using the occasion to make snide comments on Twitter, prompting a reaction from Vitalik Buterin, a co-founder of Ethereum.

Bitcoin user Nick Payton criticized “Proof of Stakers” in a tweet and claimed that the ability to vote to alter platform attributes demonstrates that PoS assets are securities.

In her response, Buterin called Payton’s ideas “an utter bare-faced falsehood.” Buterin claims that, like proof-of-work (PoW), PoS does not allow voting on protocol settings. Buterin further clarified that nodes in both PoS and PoW reject incorrect blocks.

Jimmy Song, a writer, criticized PoS last week and questioned the decentralization of the consensus method. Song claims that the mechanism doesn’t resolve the issue with the Byzantine generals. Song’s ideas were criticized by Buterin in a tweet:

Charles Hoskinson, a co-founder of Ethereum and a supporter of PoS, offered his opinion as well, stating that Song’s tweet is “beyond understanding” for its “degree of stupidity.”

Michael Saylor, a cryptocurrency bull, says that Ethereum is “clearly” a security.

Decentralized finance researcher Vivek Raman, meanwhile, expressed support for the planned Merge. Raman claimed on Twitter that the switch to PoS has given Ethereum the economic foundation it needs to compete with Bitcoin for dominance in the crypto world.

Ethereum performed a critical Merge test on the Sepolia testnet earlier in July, moving the network closer to the switch to the PoS consensus mechanism. Even though there are some glitches, developers said they won’t postpone the Merge.

What is This Upcoming Ethereum Merge

The blockchain of the second-largest cryptocurrency is getting ready to switch to a “proof-of-stake” system, which should improve the network’s productivity, viability, and scalability.

As many people outside of the blockchain community are aware, popular cryptocurrencies like Bitcoin (BTC) and Ethereum (ETH) have fallen from their all-time highs as a result of the recent crypto market crash.

In the meantime, the cryptoverse is about to undergo “the Merge,” a less well-known but no less seismic change.

The second-largest cryptocurrency Ethereum is scheduled to undergo The Merge, which would convert the network’s whole blockchain to a new structure that supporters claim will make it more effective, sustainable, and scalable. Ethereum 2.0 was previously known as this phase.

As no blockchain of this size has ever updated its consensus protocol before, it will be a difficult multi-step procedure.

Here is how it will take place and why it will be significant.

Why is The Upgrade to Ethereum Important

In essence, Ethereum is altering the way it handles transaction processing.

Like Bitcoin, it makes use of the proof-of-work (PoW) consensus mechanism, which forces users to resolve challenging mathematical puzzles in order to validate transactions and protect the network.

This approach works, although it isn’t very effective. To have a chance at mining the transaction blocks and obtaining rewards, people who find solutions to these issues, known as miners, must use a significant amount of energy and resources.

Why does this matter? Ethereum’s goal of decentralization is defeated if only a select few people can utilize it.

Over half of the validator nodes can be taken over by businesses with significant computational power, posing far greater security risks to Ethereum. A decentralized blockchain cannot, by definition, contain centralized points of failure. Because of this, the creators of Ethereum planned to switch to a different consensus algorithm called proof-of-stake (PoS).

The process is as follows: Users stake their ETH to secure the right to build a block by putting it aside, or “staking,” it. One of the users is selected to serve as the validator based on their stake.

Other contributors may testify (or confirm) that a block of transactions is genuine after one participant has done so. The network creates a new block when sufficient attestations have been produced, and incentives are then given out in ETH, the native currency of the blockchain, in proportion to the stakes of all validators.

A user runs the risk of “slashing,” or losing all of their stake, if they testify a malicious block.

Anyone who meets the minimal criteria of holding 32 ETH can join, notwithstanding the technical expertise needed to become a validator. Those who fall short of the requirement can still contribute by putting a stake in a pool of ETH to share in the profits.

Overall, PoS makes it simpler for the common user to participate by eliminating the requirement for expensive equipment and inexpensive electricity.

Furthermore, one of the primary complaints of cryptocurrencies is frequently the environmental cost of the PoW governance method. In contrast, switching to PoS is expected to result in a 99.95% reduction in the energy usage of the Ethereum network.

What Time is The Merge Anticipated to Occur

Earlier this year, Vitalik Buterin, the co-founder of Ethereum, predicted that the Merge will happen in August, when the Beacon Chain is anticipated to complete its formal switch from PoW to PoS.

Buterin’s estimate is probably a guess given the upgrade’s history of delays.

The Goerli network will host the Merge’s last trial, which is slated for the second week of August. The official Merge would then be scheduled for September following its merger.

Following developers’ suggestion that September 19 be considered as a potential date for the eagerly anticipated Merge, ETH has increased by around 30% over the past week.