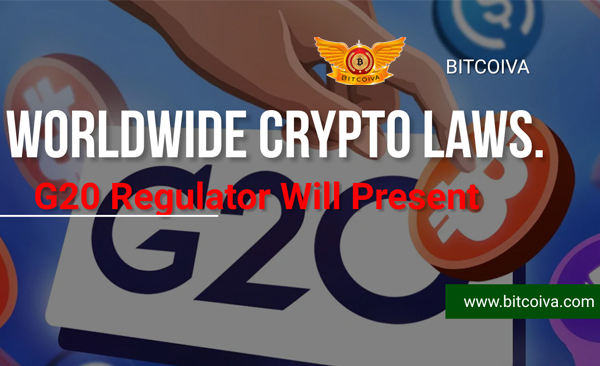 The heads of state and government of 19 nations. As well as the European Union meet once a year to discuss topics pertaining to the global economy, trade and investment, development, energy and climate change, employment, digitization, counter-terrorism, as well as migration and refugees. Now G20 Regulator Will Present Worldwide Crypto laws.

The G20 Summit, or officially the Summit on Financial Markets and the World Economy, brings together the nations. That together produce over 90% of the global gross domestic product, 80% of global trade, 2/3 of the world’s population, and almost half of its land area. It should come as no surprise. That the decisions made have at least some impact, and the following gathering will take place in Osaka on June 28–29, 2019.

For instance, the FATF concluded in September of last year. That “it is vital that we establish a global set of standards that are enforced in a uniform manner” in response to the subject of AML regulations for cryptocurrencies. The task group has hastened its work and made great progress toward achieving a “consensus among states,” according to its president. But not before the G20 asked the organization to address the issue immediately.

The summit will examine how to address the digital economy from an institutional viewpoint. The Japanese Prime Minister Shinzo Abe declared in a statement, although the conference’s formal agenda has not yet been released.

Given the prominence of blockchain technology and cryptocurrencies in current FinTech talks. As well as the group’s historical interest in these subjects, these discussions are likely to center on these issues.

So What Can We Anticipate From the Japanese G20 Summit

The summit itself is essentially the culmination of meetings of government specialists on many themes that were held in preparation, so certain parts have already reached a key point. There is also always the possibility of carrying on previous endeavours.

The G20 leaders stated that they intended to regulate crypto assets for anti-money laundering and combatting. The financing of terrorism in accordance with FATF standards. In the joint declaration of the Buenos Aires Summit in December 2018, and it will consider additional responses as needed. The Financial Stability Board (FSB) and its analysis of the risks to financial stability presented by the explosive expansion of crypto assets. Which was completed in July 2018, were specifically mentioned in the announcement.

The FSB assessment concluded that given their tiny size. The fact that they are not a replacement for money, and the fact that their use in real-world economic and financial activities is very limited. Crypto-assets do not now pose dangers to the stability of the global financial system. But the FSB warned that “the market continues to evolve swiftly, and this first judgement might change if crypto-assets were to become noticeably more popular or integrated with the central elements of the regulated financial system.”

In order to monitor and quickly detect new risks to financial stability. The FSB was required to identify metrics and any data gaps. The FSB also stated that the use of cryptocurrency assets to conceal illegal activities, money laundering, and financing of terrorism raises a number of concerns about investor and consumer protection. Even while the appropriate national authorities have started to address these problems, more international coordination is necessary given the markets’ worldwide reach. Finally, in addition to the FSB’s recent publishing of its crypto-assets regulators directory, we will probably learn more about metrics for improved monitoring of the financial stability concerns posed by crypto-assets and updating the G20 as necessary. The list offers details on the important regulators, other authorities, and international organizations in FSB jurisdictions who are handling crypto-asset concerns, as well as the areas they handle.

In October 2022, a G20 Regulator will Present Worldwide Crypto Laws

All G20 nations are represented on the Financial Stability Board (FSB), a global financial regulator, which is getting ready to suggest worldwide rules for cryptocurrencies and Stablecoins in October.

The FSB announced a significant effort to regulate cryptocurrency in a statement it released on Monday on the international regulation and oversight of crypto asset activity.

In October 2022, the watchdog intends to present a report on regulatory and supervisory approaches to Stablecoins and other crypto assets to the G20 finance minister and central bank governors. By then, the Financial Stability Board (FSB) plans to release a report on the public consultation regarding the assessment of proposals, which will include information on “how existing frameworks may be extended to bridge gaps and execute the high-level recommendations.”

Another public consultation paper with recommendations for improving global consistency in regulatory and supervisory approaches to other crypto-assets is also something the G20 authority intends to present.

The FSB underlined that its joint efforts with other international standard-setting organizations were targeted at reducing the danger of fragmentation and regulatory arbitrage.

The statement claims that the current downturn in cryptocurrency markets is what has the FSB’s interest in crypto regulations growing. The issue of cryptocurrency’s “growing interconnection with the traditional financial system” has been brought to light by the market turbulence, according to the regulator.

According to the FSB, “same activity, same risk, same regulation” must be followed while supervising the crypto markets since “it may have spill-over effects on critical elements of traditional finance, such as short-term funding markets.”

As a result, a stablecoin that joins the financial system’s mainstream must adhere to “strong regulatory and transparency norms, retain at all times the reserves that sustain stability of value, and meet applicable international criteria,” the FSB said.

Some business executives believe that the FSB’s proposal of guidelines for a single, global stablecoin legislation is a difficult challenge.

The CEO of cryptocurrency data company CoinStats, Narek Gevorgyan, emphasized that while the FSB does not have legislative authority, it does pledge to integrate digital assets into the member countries’ current legal systems. Gevorgyan questioned the regulator’s capacity to accept all regulatory methods and protocols in a statement to Cointelegraph, saying:

Existing legal frameworks can aid in regulating the market’s speculative features and centralized exchanges, but how does the FSB intend to incorporate the hundreds of current and just emerging protocols that are fundamentally resistant to control by design?

In February of this year, the FSB already listed a number of hazards related to the bitcoin industry. The authority was particularly worried about the potential failure of some Stablecoins, the problem of data gaps in the cryptocurrency business, and the possibly dangerous results of the quickly expanding decentralized finance industry.