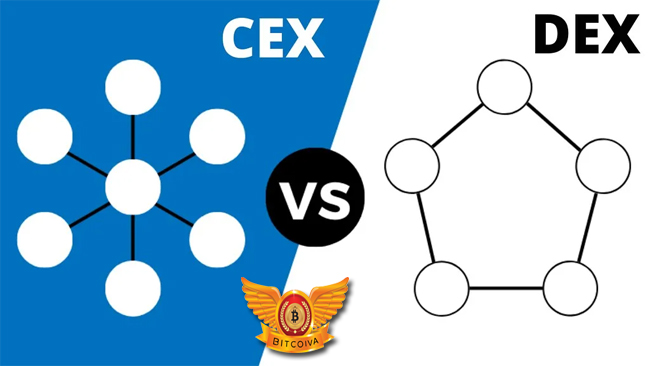 What is a Crypto Centralized Exchange?

CEX is a market where a middleman conducts and controls deals as well as manages the assets. When you swap one coin for another on a centralized exchange, the transaction does not take place directly between you and the other individual. Instead, the exchange manages the trade.

Assume you live in a hamlet where people exchange things rather than money. If you’re cultivating potatoes, consider giving some to the cow farmer in exchange for milk.

A group of peasants decides to set up a market in the village square one day. The regulated market operates 24 hours a day, seven days a week, allowing for a more orderly exchange of goods, more safety, and the elimination of the anxiety of not swapping your potatoes.

The markets owned by the folks who constructed it. That is, they earn from each trade that others make. You take milk and provide potatoes to the market. When the cow farmer runs out of potatoes, he goes to the market to get some.

However, keep in mind that in the crypto world, you can’t take your potatoes and milk, termed crypto assets, home and put them in a personal safe. Instead, despite the fact that you own them, they are kept in a safe with your name on it in the market. However, we’ll return to this key point later.

What is a Crypto Decentralized Exchange?

DEX , a sort of trade in which no third party is involved. Instead of entrusting your assets to a third party, such as a bank, you keep them in a DEX.

Let us return to our village. In the village square, there isn’t a centralised market run by a single group. Instead, the villagers construct a massive automated safe that is controlled by no one. Depending on the current potato/milk prices, you can only take as much from the safe as you donate. So, anytime you require a certain item, you go to the massive safe, complete the transfer, return home, and place the item in your personal safe.

DEX vs. CEX: What’s the Difference?

As of 2021, there are over 4,000 different cryptocurrencies on the market. To be listed on a CEX, an asset must meet security protocols. The protocols have trading activity, and adhere to legal requirements.

You can list anything on a DEX. This implies you’ll take on greater risk, but it also means you’ll be able to trade new, in-demand assets. Everyone has milk and potatoes, but the price of that mango is likely to rise soon. If you don’t do your homework, you’ll end up with a sack full of rotting assets.

You’re less likely to come across a fraud at a CEX. That is, it is unlikely that you will exchange potatoes for milk, return home, and discover that you have water instead of milk. People acquire unknown currencies and lose their entire investment when the project turns out to be a hoax, and crooks flee with millions of dollars in cryptocurrency.

Similarly, your personal safe, also known as your wallet, is in the hands of the centralised exchange. This implies that if you forget your wallet’s password, you can request a password reset from the exchange.

If you’re defrauded on the DEX, there’s no way to get your money back. Also, because you own your wallet, you won’t be able to change your password if you forget your seed phrase (a set of random words that only you know).

Assume, however, that the police arrive in your town one day and declare the organised market exchange to be illegal. Alternatively, a gang of thieves (hackers) may break into the market. Remember those items you needed to keep in the market exchange’s personal safe? Everything has vanished. Your neighbour, on the other hand, who trades on a DEX, will keep all of his assets even if the DEX is shut down.

CEXs are similar to any other large Internet service, such as Facebook, Twitter, and so on. They rely on tried-and-true technology that is more reliable and has fewer hitches and bumps for the end-user.

The scalability of DEX technology is one of its fundamental flaws. Before reaching its limit, a blockchain network must be able to handle a certain amount of transactions. Ethereum, for example, can process 30 transactions per second as of May 2021. Visa, for example, handles roughly 1,700 transactions each second (although Visa claims it can handle 24,000 transactions).

Fortunately, because blockchain is a fast emerging technology, the limitations that DEXs have are likely to diminish in the near future.

While a centralised exchange is more user-friendly and potentially safer, a decentralised exchange is a very new technology that will most likely become the industry standard in the future. When trading bitcoin and other crypto assets, though, you’re more concerned with making money today or tomorrow than with what will happen in ten years. In terms of short-term benefits, CEXs are a safe entry to the world of crypto trading, but DEXs are a riskier environment with larger rewards if you play the game well. The bottom line is that you should do both. Also, keep in mind the golden rule of crypto trading: never invest money you can’t afford to lose. Otherwise, you’ll be left with a sack of spoilt milk and rotten cryptos instead of the potatoes you worked so hard to grow.