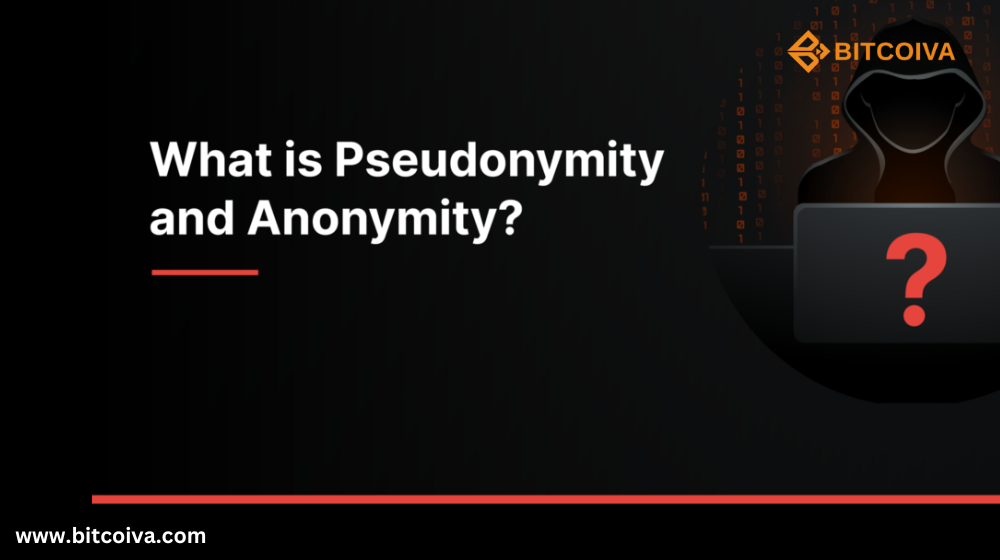 To some extent, people in the crypto-verse use anonymity or pseudonymity for security and privacy concerns, or to move toward self-sovereignty. Both pseudonymity and anonymity provide important safeguards in their own ways.

Let us explore and briefly understand these concepts in this blog. What are the definitions of Pseudonymity and Anonymity?

In general, anonymity implies that no one knows your true identity. Despite the fact that they are undoubtedly aware of your online activity. It means you can go about your business while remaining anonymous. Anonymity keeps your actions and true identity separate. In terms of Cryptocurrency Websites In India and blockchain security, anonymity means that no activity, transactions, or exchanges on the blockchain can be linked to a specific user. Whether they use a pseudonym or not.

The use of a different name on social media, such as a pen-name or nickname, refers to as “pseudonymity.” It is commonly used to conceal your true identity while retaining your identity under a different name.

While pseudonymity allows a real person, such as an artist or poet, to keep their identity for their work by using a pen-name or nickname. Some people abuse it by using a false name to gain financial advantage. In such cases, the victim may blame the offender’s wrongdoing on his fictitious name rather than his true identity. In terms of blockchain security, pseudonymity means that even if the identity of the person making the transaction is unknown. And all of their transactions link to the same pseudonymous identity.

Simply put, anonymity is a far more powerful form of privacy than pseudonymity. However, it has some far-reaching implications, as we will see.

Why Are They So Important To Cryptocurrencies?

The World’s Largest Cryptocurrency Exchange, Bitcoin, and Ethereum, operate on pseudonymous systems. This simply means that the user’s identity is unknown. And the activity associated with their wallet represents a large cryptographic address. From the standpoint of blockchain security, these addresses are critical in keeping track of the fund’s flow.

Some projects use cryptography to provide complete anonymity. These projects are also known as “privacy coins” because they prevent transactions from being linked to specific addresses. Thus making it more difficult for funds to track. Pseudonymity and anonymity have emerged as key tenets of cryptocurrency.

Have you heard of the person known as “Satoshi Nakamoto”? If you’re into cryptocurrency, you’ve probably heard of Largest Crypto Exchange In India Bitcoin’s infamous founder (s). Satoshi Nakamoto is a pseudonym whose true identity is unknown.

How Will Cryptocurrency Regulation Affect Pseudonymity and Anonymity?

The Cryptocurrency Trading Platform India and blockchain technology grows and becomes an increasingly important feature of our understanding of Web 3 and the Metaverse. We can see how the nature and function of pseudonymity and anonymity sets to become a major point of contention between the industry’s growth and government and institutional regulation. Much of the policy debate surrounding cryptocurrency adoption centers on determining how the new industry can fit within the existing framework of financial regulations.

The most important of these is how KYC and AML checks can ensure that users. These are held accountable for illegal activity. Because most cryptocurrencies are pseudonymous and anonymous. Regulators have focused on fiat to crypto on ramps, which exist almost exclusively on centralized exchanges.

As a result, most centralized exchanges have adopted some form of KYC checks as a prerequisite for using them. Coinbase, for example, requires users to undergo stringent KYC checks before they can begin trading on its platform. Binance, another major centralized exchange, has barred from operating in both the United Kingdom and Japan. This is due to its failure to obtain regulatory approval in both countries. The fact that Coinbase did not require KYC checks for a long time and that Binance could operate globally demonstrates the growing urgency with which governments and institutions are regulating the crypto sector. The difficult choices that will have to be made between regulatory compliance and the preservation of pseudonymity and anonymity.

This decentralization, however, clashes with the need for KYC checks on both a technical and ideological level. At the technological level, the decentralized nature of a DEX makes it extremely difficult to verify a user’s identity without a human intermediary.

And would likely necessitate an AI solution capable of verifying user identity off-chain. While this is a difficult task, given the increasing need for compliance, such a technology has the potential to be a massive industry. On an ideological level, KYC checks run up against many in the crypto community’s deeply held values of anonymity and privacy.

Many people have used blockchain anonymity to avoid interference from hostile and dictatorial governments. As a result, any measures that make it easier to discover a user’s true identity view as tampering with one of blockchain’s primary utilities.

While the SEC has issued statements on DeFi, no direct action had taken. However, if such statements lead to regulation, the SEC and the cryptocurrency community will almost certainly clash.

Decentralization and Its Benefits in Anonymity and Pseudonymity

Another of blockchain’s fundamental tenets, decentralization, is at the heart of both the technological and ideological tensions between the preservation of anonymity and pseudonymity and the growing demand for compliance.

Indeed, decentralization is closely related to this issue because it is both a technological practice and a deeply held value. Blockchains, thought as the technology that has made the idea of decentralization a reality. Part of this ideal is preserving a so-called “trustless system.” No single network participant requires to trust any other to trade. The need for trust is inextricably linked to the need for a verifiable identity. We want to know who someone is before we trust them. And part of that trust is based on the ability to hold them accountable if that trust is broken.

Decentralization has eliminated the need for trust from either party in a trade and a verifiable identity, allowing for the widespread use of pseudonymity and anonymity. Decentralization and blockchain technology has eliminated the need for either party to ‘know its customer’ when engaging in a transaction. It doesn’t take a genius to see how this will inevitably affect regulatory bodies’ know-your-customer checks.

Are They Boon or Bane for Cryptocurrency?

Ultimately, those who advocate for complete pseudonymity and anonymity, as well as those who advocate for increased KYC and AML checks, do so to support and protect blockchain security. Thereby making crypto safe and secure. Because this is a young and rapidly evolving industry, both developers and authorities are attempting to discover viable methods. This is to ensure blockchain security without jeopardizing the community’s cherished principles of pseudonymity and anonymity. There would be far fewer rug pulls and other crypto scams if people knew exactly who was behind a project. The most visible drawbacks of pseudonymity and anonymity is how it has empowered bad actors, allowing them to operate with impunity.

The importance of having pseudonymity and anonymity, as well as implementing rules and regulations, have frequently discussed. While it can be a contentious topic, it is unavoidable given the crypto industry’s widespread presence. In any case, all parties will have to make concessions to ensure a safe and secure cryptocurrency and ongoing blockchain security.

One thought on “What Do Pseudonymity and Anonymity Mean”