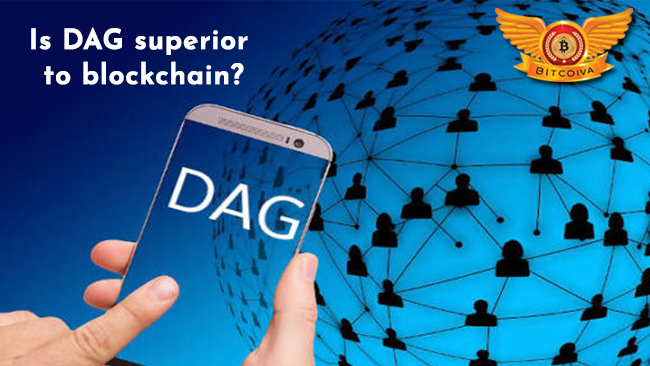 Blockchain technology has gone a long way and has now been in use for a decade. So, the first 10 years have brought fresh and exciting things to the surface. Making the billionaire wealthy list overnight is thus an appealing source of investment for certain enthusiasts. But is there any chances that DAG superior to blockchain.

The distributed ledger technology (DLT) that carries digital currencies is, nevertheless, the most spectacular feature of the previous 10 years of cryptocurrencies. As we all know, the very first digital currency Blockchain made news in the immediate aftermath of bitcoin.

Both Distributed Ledger Technology (DLT) and Blockchain Technology are words that are frequently used interchangeably. However, this is incorrect because DLT encompasses different technologies and is a border word. Another form of DLT is the Directed Acyclic Graph. Although numerous crypto protocols have been dubbed “Ethereum Killers”, they have experienced limited actual success. Be a result, DAGs or Directed Acyclic Graphs are frequently referred to as “Blockchain Killers”.

Both DAG and Blockchain technologies have the potential to be distributed and decentralised. Both of these can also record transactions on a digital ledger. Also Both of them have a token-economic incentive system. Despite their obvious similarities, they are very distinct.

What is a Directed Acyclic Graph (DAG)?

A Directed Acyclic Graph (DAG) is a graph that depicts a succession of actions and the flow from one to the next. The representation of activities is in the form of circles (vertex), and the sequence in which the entire portrayal of activities is in the form of lines (edge) with a unidirectional arrow. DAG is a unique sort of directed graph data structure that employs topological ordering and distributed ledger technology that is based on consensus procedures. Two things happen in common while recording transactions on the DAG, where the referencing of older transactions is documented.

Differences Between Blockchain and DAG Technology

After discussing what DAGs are, let us now highlight their key contrasts when compared to blockchain technology solutions. As a result, both technologies have a number of significant distinctions. Let’s take a look at each of them.

The Mining context is typically the practise of approving transactions in a blockchain while obtaining new currency in exchange. The miner does complicated computations using specialised hardware processes. So a successful miner gets to confirm in order to add transactions to the next block and receive tokens for his work.

Aside from mining, blockchain networks can establish consensus via the Proof-of-Stake methodology. Validators take up the duty of miners in this case. As a result, achieving agreement here is contingent on the value of stakes in the network.

However, in terms of scalability, blockchain technology has fewer transactions per second. So, while adding a high number of transactions with better scalability is not possible, the unique data structure of DAGs allows it.

The contrasting launch times represent a significant disparity in the maturity process for both technologies. Satoshi Nakamoto anonymously released the Bitcoin whitepaper in 2008, which introduced blockchain. However, the first platform to use DAGs was introduced in 2015, and it quickly gained popularity.

What Are the Advantages of DAG?

DAG, like blockchain, is a novel protocol, and many have validated its uniqueness as even more revolutionary. Hash graph technology, for example, is a distributed ledger solution that use DAGs to achieve asynchronous Byzantine Fault-Tolerant (aBFT) consensus. Here are some of the unspoken advantages of this new technology.

One of the primary benefits of a Directed Acyclic Graph is its fast transaction speed. As a result, any user can publish transactions on the network and receive permission at the same time. However, there is a time lag or waiting period between logging transactions and confirmation in a typical blockchain network. That procedure is known as Block time.

The development of DAGs addresses the scalability and throughput challenges associated with Proof of Work (PoW) blockchain networks. It is feasible since they are not limited by block times. As a result, as compared to typical blockchains, Directed Acyclic Graphs may handle more transactions per second (TPS).

DAGs are devoid of mining, in contrast to the mining process used as the consensus procedure by Bitcoin, Ethereum, and other currency. As a result, the absence helps to the efficiency of DAGs in recording transactions, even though PoW is not inherently bad.

The utilisation of DAGs has shown to be more cost-effective than the main public blockchain alternative currently available. As a result, the protocol has no minors that inspire before transaction completion, reducing overall pressure. It increases the number of transactions. And this is without the threat of further expenses.

Because of the high energy consumption of DAG and related projects or protocols, the PoW consensus technique is not used. As a result, the comparing PoW-powered blockchain has ranked all direct acyclic networks as a more environmentally friendly alternative. The other DLT and the role of cryptocurrency-backed technology in climate change.

Is DAG superior to Blockchain

The discussion around DAG and Blockchain is becoming more intense, speculative, and widespread. Although the bitcoin blockchain is the oldest, DAG can address the majority of the blockchain’s issues. As a result, DAG is the largest and most decentralised DLT available. Apart from that, the whole DLT world is now centred on the market sector before the blockchain application becomes popular. As a result, we cannot guarantee that the bitcoin blockchain will be the world’s leading crypto technology in ten years. It is due to the industry expanding by two or three times its current size.

As a result, it was noted that both blockchain technology and DAG had similarities and differences. Which is superior is determined by the deployment of its use cases. According on the use case profiling, both have advantages and downsides. Internet of Things (IoT), Microtransactions, Large Payments, and Peer-to-Peer Energy Trading are among the application cases.

As there are many other types of Distributed Ledger Technologies available today, DAG and Blockchain are two of the most closely connected. Both of these technologies have certain similarities as well as significant variances. The validation of DAG has been an improvement and a foreshadowing of the future of blockchain technology.

In its future growing push, Distributed Ledger Technology has already exceeded the inferior difficulties. As a result, we may see more mainstream companies starting to adopt it into their business operations in the future. If you want to implement DLT, please contact our blockchain specialists.