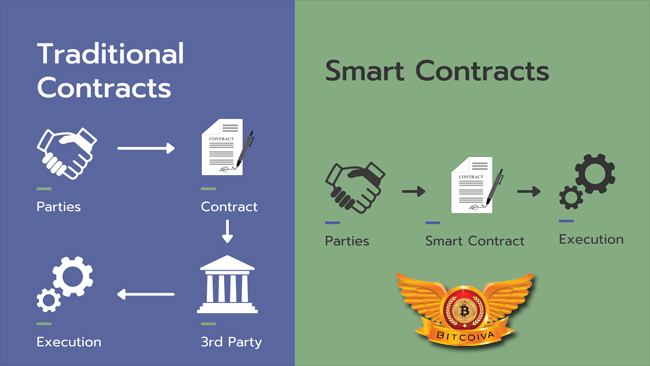 A smart contract is a digital agreement that is implemented automatically and based on predetermined conditions. Smart contracts can be exceedingly complicated, requiring several conditional criteria, or as simple as just a digital signature to spend money.

What is Smart Contract Exactly?

A smart contract, like any other contract, lays forth the parameters of a deal. However, unlike a typical contract, the rules of a smart contract carries out as code on a blockchain. From loans/ insurance to logistics and gaming, smart contracts allow developers to create apps that take advantage of blockchain security, reliability, and accessibility. This in turn provides complex peer-to-peer functionality.

Smart contracts, like any other contract, spell forth the parameters of a business or agreement. The terms established and implemented as code running on a blockchain rather than on paper on a lawyer’s desk. Smart contracts build on Bitcoin’s core concept of sending and receiving money without the need for a “trusted intermediary”. It allows secure automation and decentralization of nearly any type of agreement or transaction, no matter how complicated. They also provide security, stability, and borderless accessibility because they run on a blockchain like Ethereum.

How do They Work?

A smart contract is a business logic-encoding programme that runs on a dedicated virtual machine. It embeds in a blockchain or other distributed ledger.

1: Business teams work with developers to specify the smart contract’s desired behaviour in response to specific events or circumstances.

3: More complex actions, such as determining the value of a derivative financial instrument or releasing an insurance pay-out automatically, may be encoded using more advanced logic.

4: The logic then created and tested using a smart contract development tool. Following the completion of the application, it is sent to a different team for security testing.

5: A company that specialises in vetting smart contract security or an internal expert could be used.

6: Once the contract has authorized, it deploys on an existing blockchain or equivalent distributed ledger infrastructure.

7: Once deployed, the smart contract sets up to listen for event updates from a “oracle.” Which is essentially a cryptographically secure streaming data source.

8: The smart contract executes after it has the required combination of events from one or more oracles.

Pay-to-Public-Key-Hash is the most prevalent Bitcoin script type (P2PKH). P2PKH scripts allow bitcoin to be transmitted to a Bitcoin address. Where it can only be spent by the owner of the accompanying private key.

On a technical level, P2PKH scripts specify that a user must give an ECDSA signature that matches the public key. In which the hash is specified by the script in order to spend bitcoin. Because only the owner of the private key corresponding to the public key hash can make a valid signature. The bitcoin belongs entirely to the owner of the private key.

Unlike P2PKH scripts, which only require one signature, multisig scripts can demand any number of signatures, from any number of users. The following is how multi signature scripts function. There is a list of n public keys and a number m that is less than or equal to n. Only m signatures, each of which corresponds to one of the n public keys specified, can use to spend the bitcoin locked to this script.

Two signatures from a group of three public keys requires 2-of-3 multisig arrangement. This allows three parties to jointly keep cash while ensuring that no one party can steal the funds or prevent the majority from spending them as they see fit. Decentralized services like Bisq and Hodl Hodl use 2-of-3 multisig for trust-minimized escrow.

Bitcoin Transactions with a Time Limit

Bitcoin transactions – time-locked, which means they expire after a set period of time. Time locks also use in conjunction with locking scripts to alter a bitcoin’s spending criteria. For example, a script might demand three signatures to spend bitcoin before a deadline, but only one signature after that. This allows for fallback choices, ideally avoiding a loss of funds.

The Pay-to-Script-Hash (P2SH) standard, which expanded to include P2WSH as part of the SegWit upgrade, allows for arbitrary complicated scripts. Bitcoin transfers to the hash of any script. It includes any of the above instances, using P2SH and P2WSH smart contracts. This design reduces the cost of transmitting bitcoin to a sophisticated smart contract. It also ensures that the bitcoin’s privacy until it spent.

The Taproot upgrade for Bitcoin will include a new script type called Pay-to-Taproot (P2TR). This will combine the capability of P2PKH and P2SH scripts, allowing bitcoin to deliver to a public key as well as arbitrary scripts. P2TR, on the other hand, uses Merkelized Alternative Script Trees (MAST) to allow bitcoin to transmit upto 2 128 separate, arbitrary scripts. Whereas P2SH and P2WSH only permit bitcoin to deliver to a single script. To spend the bitcoin, any of these programmes will suffice.

The Taproot addition to Bitcoin gives users a lot of power when it comes to creating complicated smart contracts on the blockchain. It also improves the efficiency and privacy of Lightning Channels, which are smart contracts in and of themselves.

Why Smart Contract is Imp?

Developers may use smart contracts to create a wide range of decentralised apps and coins. They’re utilized from new financial tools to logistics and gaming. And they’re kept on a blockchain just like any other crypto transaction. A smart-contract programme can’t usually be updated or reversed once it’s been added on the blockchain. Although there are some exceptions.

Decentralized applications, or “dapps,” powered by smart-contract. They contain decentralised finance (or DeFi) technology that aspires to revolutionize the financial industry. DeFi apps allow bitcoin users to conduct complicated financial transactions. Such as saving, lending, and insurance — without the involvement of a bank or other financial institution, and from any location on the planet.

Smart contracts are technologies that, if specific criteria are satisfied, can automatically execute transactions without the need for an intermediary organisation or company.