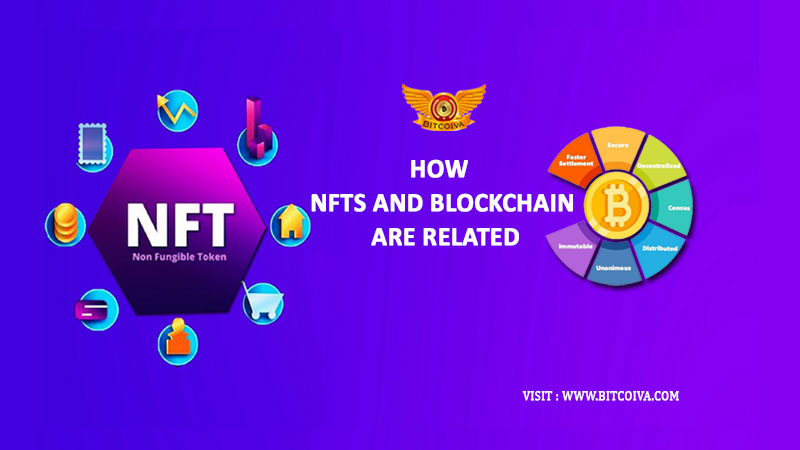 NFTs and Blockchain are rapidly sweeping the worlds of digital money, art, and collectibles. Digital artists’ life are being transformed as a result of massive sales to a new crypto-audience. And celebs are jumping on board as they see a new way to communicate with their audience. However, digital art is merely one application of NFTs. They can be used to indicate ownership of any one-of-a-kind asset, such as a deed for a digital or physical item.

What Is Blockchain and How Does It Work?

Blockchain is a method of securely capturing and storing data and transactions in a database that is replicated and distributed over a network of computers. Blockchain is also known as “distributed ledger technology” since the blockchain database is referred to as a “ledger.” Blockchain ledgers can be made public (like Bitcoin) or private (like a private ledger) (similar to a closed corporate intranet network). Unlike a standard database, which organizes data into tables, the blockchain ledger group’s information into “blocks,” which include collections of data or information. The type of transaction and the amount of data that can be stored in a block are determined by the blockchain in question.

When you enter a transaction into the blockchain system, it is sent to a network of peer-to-peer computers all around the world. Validating transactions on the blockchain can be done via a variety of methods. Proof of Work is used in Bitcoin, for example, where computers on the blockchain employ their processing capacity to solve equations to authenticate the transaction’s authenticity. Other blockchains may utilize different methods for transaction validation. The transactions are chained together in blocks with a specific time stamp and a cryptographic signature called a hash once they have been validated to be legitimate.

The blocks make up the ledger, which is used to establish a long history of all transactions that is both permanent and unchangeable. Immutability is a key property since it ensures that if one block in a chain is modified, the entire chain would fail. This makes changing, hacking, or cheating the system difficult (though not impossible). To hack a blockchain system, for example, hackers would have to change every block in the chain, across all distributed versions of the chain, which is exceedingly implausible from a technical standpoint.

What is Non-Fungible Tokens (NFTs) and How it Works?

An NFT is a fungible and interchangeable unit of digital data kept on the blockchain, as opposed to cryptocurrency (i.e., one is no different than another, like any one dollar bill is no different from another dollar bill in value or meaning). NFTs are one-of-a-kind and non-replicable. NFTs make use of blockchain technology to give verifiable proof of ownership of the item with which the NFT is linked. An NFT is essentially a digital certificate of authenticity.

NFTs have been linked to easily reproducible goods like images, movies, audio, and other sorts of digital assets, as well as more ephemeral commodities like a labelled moment in time, such as NBA Top Shot, which sells NFTs for amazing plays in NBA games, or Jack Dorsey, who sold an NFT for the first tweet. Purchase of an NFT does not necessarily confer any of the underlying intellectual property rights (e.g., copyright) in the subject matter of the NFT, just as purchasing a limited edition signed and numbered print of a photograph does not necessarily confer copyright ownership of the photograph to the purchaser.

A smart contract connected with the NFT may transfer the underlying intellectual property rights (or a subset of them), but care should be taken to ensure that the smart contract does not contradict with the rules of the website or platform from which the NFT is made or acquired.

NFTs can be issued, or “minted,” on a variety of blockchains, the most popular of which being Ethereum and Solana. As previously said, Ether is a cryptocurrency, but its blockchain, Ethereum, also supports NFTs, which contain additional data about the digital file or other unique thing with which they are linked.

This distinguishes them from the ETH cryptocurrency, which merely stores the amount, transaction date, sender, and receiver on the blockchain. The NFT, like cryptocurrency, is controlled by a secret encryption key. The rights to the cryptocurrency or NFT are also lost or stolen if that key is lost or stolen. Many people like NFTs because they have the potential to generate additional revenue streams from a photo, audio, or other digital file, as well as the ability for the creator of the NFT to receive royalties on all subsequent sales of the NFT, which is usually not the case when selling unique items through other traditional methods.

There are other possible negatives to NFTs, such as the fact that the cost of producing them (known as “minting”) varies greatly, often costing more than the NFT’s worth. Furthermore, there may be ambiguity about what rights are connected with an NFT, as well as doubts about the legitimacy of some NFTs. Notably, there have already been some high-profile legal challenges over whether an NFT minter has the requisite rights (such as licenses or personal rights) to create the NFT in the first place. When minting, buying, or selling an NFT, employ prudence and due diligence, just as you would with any other transaction.

How NFT and Blockchain are Related?

When we talk about NFT as a metaverse currency, it’s important to note that it uses the same blockchain technology as cryptocurrencies, despite the fact that it isn’t a form of coin.

Coins are works of art, video game content, music, or any other stuff that can be tied to this particular token. As a result, a large number of artists and content providers have jumped on board this new trend to commercialize their work.

The relationship with the blockchain is based on a key pillar: this technology ensures that these assets are auditable, which means that buyers of a unique asset can keep track of it. In short, the blockchain is in charge of introducing interoperability and lacklustre functionality.

The importance of NFTs stems from the fact that their provenance may be guaranteed by incorporating a code into the programming. This means that if the work is sold to another customer, the author of the piece will be paid a share of the sale price. As a result of the proliferation of NFT markets, it has become a phenomena in a variety of industries.

Ethereum is the Foundation for NFTs

Ethereum is an open source platform based on the blockchain that permits the generation of smart contracts, which are bits of code written in a programming language that express precise instructions and are performed by the Ethereum virtual machine.

Non fungible tokens (NFTs) are unique and irreplaceable digital assets that run on the blockchain, giving them a unique worth, as we saw in a previous post. Ethereum is the foundation on which NFTs are founded.

NFTs can be digital artwork, sound, text, or any material backed by a digital certificate created on blockchain, allowing enterprises to monetize their digital activities and opening up a world of potential for artists.