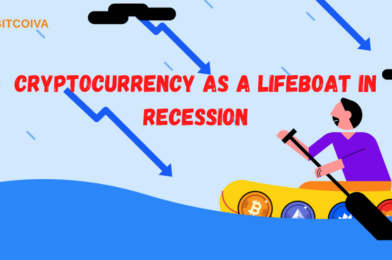 Receding economic output is the hallmark of a recession, which naturally occurs as part of the economic cycle. In other words, a recession occurs when the domestic production of goods and services drops. Recessions have occurred almost in all countries to varying degrees of severity, from minor to the most severe kind of Recession, and depression, and the most popular cryptocurrency in India is a Lifeboat.

Governments are continuously on vigil for indicators of the Recession. They will use all tools at their disposal to avert recessions from arising or to mitigate the destructive impact of a recession if one does occur. However, there has been a lot of discussion about whether the public investment can be beneficial.

Recessionary attempts by the government have often backfired, resulting in a worsening economic situation. This blog will analyze the viability and effectiveness of blockchain-powered Crypto App India as a potential alternative to the global financial system.

Recessions are natural factors of the economic cycle, and little things can be done to prevent them. Here are a few things governments and central banks can do to mitigate the impact of a recession.

The government will raise government spending or lower tax rates to encourage the economy during a recession. Both strategies aim to boost economic activity and increase individuals’ disposable income to enable aggregate economic demand.

In a recession, the central bank will try to increase the money supply by reducing interest rates and printing more money. People will be able to spend more money on products and services, leading to economic development due to the “flooding.” There are drawbacks to this strategy, as a country with low-interest rates already has very little room to maneuver in terms of monetary policy, especially if printing more money devalues the native currency and hurts foreign commerce.

It comprises public funds to avert an institution from collapsing or closing down, owing to the potentially detrimental repercussions. A good example would be the Federal Reserve’s intervention in the subprime mortgage crisis in 2007.

Monetary Policy is the most often used instrument by central banks and governments since it is the quickest to implement. To jumpstart the economy, central banks lower interest rates.

Many nations have considered using negative interest rates to boost the economy’s financial crisis. For all practical purposes, preventing the home currency from increasing is intended to raise its competitiveness against foreign currencies. It compels us to ponder whether cryptocurrencies can act as lifeboats during the economic Recession.

Before concluding, let’s look at the features of blockchain-powered cryptocurrencies like Bitcoin.

Bitcoin, the Most Popular Cryptocurrency In India as a Lifeboat to survive Recession

Because of the existing monetary system’s inherent flaws and inefficiencies, the advent of Bitcoin in the wake of the global financial crisis has given it a new identity as a viable alternative. The properties of the most popular cryptocurrency in India Bitcoin, and other cryptocurrencies, appear better than fiat currency.

As a result of increasing prices, inflation is one of the greatest threats to society’s financial well-being. Inflation decreases the long-term purchasing power of our money. For example,100 years ago, $100 in fiat currency bought more than $100 now. Fiat currency’s value depreciates over time because of the infinite supply and the capacity of central banks to generate additional money at will. However, with cryptocurrencies, the supply is usually fixed and limited. The total number of Bitcoins in circulation supply is strictly limited. Fixed-supply money is immune to inflation since its value rises in proportion to an increase in demand and supply.

The cryptocurrency India market’s decentralization empowers the public, as anybody may participate in the financial system. The criteria for entering and participating in the global financial system are transparent and open, with every increment in the money supply being recorded on the public ledger. In other words, this is a far cry from the fiat system, where only those at the top of the government and banking organizations know how the money supply grows or shrinks.

Cryptocurrencies are blockchain-based technology; and can be accessed with no fees or restrictions by anyone, at any time, anywhere in the world. It protects the financial system against any manipulation or deception.

There is no difference in the value of the US dollar in China and France. But it’s still the currency of the United States, which means it has all the advantages and disadvantages of the American economy. Furthermore, it’s challenging in many nations to obtain, store, and utilize in any capacity other than cash.

Because, Bitcoin, being one of the top 5 cryptocurrency in India isn’t tied to a single economy’s success or failure, it is organically diverse. Instead, it represents wealth without boundaries.

Apart from macroeconomic trends, the price of Bitcoin might fluctuate due to legislation, environmental concerns, government crackdowns on mining, changes in institutional usage, or other variables. However, each element is unique, guaranteeing that the value of bitcoin is not at risk from a single incident.

For example, the US Securities and Exchange Commission (SEC) is cracking down on cryptocurrency exchange India, like Coinbase, as it strives to regulate financial products connected to cryptocurrencies. This news has a direct impact on Coinbase’s stock price. However, the bitcoin price is less likely to fluctuate due to such information because the future of bitcoin is independent of any one country’s regulatory policies, not even the United States.

Bitcoin’s scarcity, safety, and portability all contribute to its value. When compared to stock, Bitcoin’s growth is not directly linked to solid industry tailwinds, technical advantages, innovation, financial discipline, or a good management team. Instead, it’s effective in both booms and busts in the economy.

While Ethereum has more practical uses and perhaps more significant upside than bitcoin, bitcoin is better positioned to perform during a recession since it is less volatile. Its objective is not to accelerate the adoption of smart contracts, non-fungible coins, or other applications of blockchain technology. Instead, bitcoin buy cryptocurrency in India serves as a means of preserving wealth.

Considering these factors, it’s secure to assume cryptocurrencies like Bitcoin, powered by Blockchain technology, could result as a shelter for ordinary people looking to shield themselves from the anger of economic recessions.

The Bitcoin-led cryptocurrency movement has shown that it is an alternative to the fiat currency system. As a means of countering the inherent shortcomings of fiat money and the government’s inability to properly manage its own economic and monetary policies, cryptocurrencies were developed with qualities like transparency, empowerment, and inflation resistance.