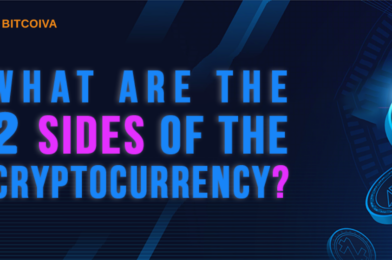 As an impact of the growing pace of technological development, digital currencies are rapidly establishing themselves in the global market. Being the flag bearer, Cryptocurrency is the talk of the town and has been growing at an increasing rate since 2015. Cryptocurrency India has gathered a considerable fan base, many of whom consider it a profitable investment and even the future. Let’s learn about Cryptocurrency and its two sides in this blog.

What Exactly is Cryptocurrency?

Cryptocurrency is a digital asset that is created and traded through the use of cryptography on a crypto currency Trading Platform. It differs from fiat currency like paper currency or metal coins since it is made using complex computer codes.

1. Unlike traditional money, it is intangible and cannot be stored and handled.

2. It’s a virtual currency, a different payment system developed with an encryption algorithm.

3. It is controlled by a decentralized network of data ledgers and blockchains rather than a single body.

Keeps a Check on Inflation

Many Indian cryptocurrency coin has dropped their value over time due to inflation. Most cryptocurrencies have a set amount when they are initially introduced. The amount of any currency is specified in the source code; for example, there were only 21 million Bitcoins published worldwide. Therefore, its value will also rise when demand rises, keeping up with the market and preventing inflation.

A Quick Way to Transfer Funds

Cryptocurrencies are considered the best option for a transaction and have always maintained that position. It is because they enable instant domestic and international transactions. And the verification process only takes a short time. And only a few obstacles are there to overcome.

Cryptocurrencies are highly secure, but some exchanges are not. Most crypto exchange platform keep track of their wallet information to maintain users’ IDs. Hackers may be able to access many accounts by stealing their data. Once they have access, these hackers can quickly move funds from those accounts.

Decentralized But Still Operated by Some Organizations

The decentralized nature of cryptocurrency is well-known. However, some currency issuers and organizations continue to control the circulation and supply of some of these currencies. These holders can prevent the coin’s price from significant fluctuations.

The Adverse Impact of Mining on the Environment

Cryptocurrency mining is a very energy-intensive process requiring much computing and electricity consumption. For example, Bitcoin mining uses a lot of energy and sophisticated computers, and standard computers cannot do it.

Despite all the on-ramps put in place, crypto markets are still in their babyhood from an institutional standpoint. An asset class is deemed immature by an organization if the markets are less liquid and fragmented than those of its established counterparts. They are, therefore, simpler to control and more difficult to handle.

On the other hand, from a business organization viewpoint, cryptography’s permissionless and open-source nature is another clear challenge that needs to be overcome. Regulators must also be on the leading edge of what is technically possible due to buy Cryptocurrency in India, which is a more significant challenge than the role they have been playing up to this point. It’s challenging enough to hold up with financial innovation in fully established markets.

Top-down market, businesses must first take a firm’s client idea to create a finished financial product for the centralized. It calls for the design of tools for the continuing management of all those previously described, a systematic methodology, and the gathering and refining of data.

In this Bottom-Up view, it’s critical to recognize that you are dealing with a combination of problems and preconceptions in different to much of what has come before. From a bottom-up perspective, however, even Bitcoin’s status as a bearer asset is a feature rather than a bug, contrary to what some institutional mindsets would have. Moreover, remember that one of the top 5 cryptocurrency in India, Bitcoin, was developed in response to the long-standing monetary excesses committed by central banks.

Decentralized systems inevitably grow more dispersed and erratically. Therefore, there are many possibilities to see what high-quality data may bring to the table when the data provider looks at the landscape from the bottom up. These opportunities, however, are very different.

Cryptocurrency India Tax: What it Means

The current taxation of crypto transactions has seemed to popularize a wrong notion that the Indian government has legalized Cryptocurrency as a legitimate tender. Though, in reality, the legal status of Cryptocurrency remains hazed until it is formally declared legal or illegal.

There was much tension around the alleged crypto bill, which would ultimately legalize crypto since investors say imposing the tax was a positive move in this direction. But the bill’s introduction in the parliament’s winter session has yet to be halted.

Nevertheless, if cryptocurrency India gets adopted as a legal tender, it would be the second country worldwide after EL Salvador to do so, setting an example for other nations. The government may tax Indians who trade in cryptocurrencies if they are not restricted. The government may consider imposing TDS (tax deducted at source) and TCS (tax collected at source) on cryptocurrency sales and purchases above a certain level. If this occurs, it will aid the authorities in identifying and tracking the investment.

Final Thoughts: What Does the Future Hold?

Recently, we are witnessing a fascinating evolutionary battle between top-down and bottom-up approaches to consensus building and centralized versus decentralized methods of organization and justice. It is an evolutionary process because the two systems are evolving independently in a fuzzy environment where the definition of “best fit” is a shifting objective.