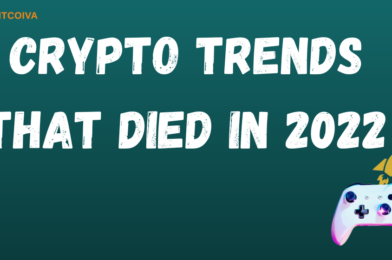 2021 was a year of great innovation and expansion in the crypto space. Several promising exchange platforms, crypto trends, and projects were launched, and many provided novel utilities and opportunities to users.

While some trends remain to have real long-term staying power, like decentralized finance(Defi), non-fungible assets, and the metaverse, others still need to achieve the same success so far.

Many cryptocurrency India investors and users get stuck in what inevitably turn out to be passing clouds and become bagholders. Keeping this in mind, we have three trends that could end up nothing but a passing shadow.

Play-to-Earn (P2P) Games were one of the top trends of 2021; it took the blockchain sector by promising to shake up the way that games are devised while allowing players to earn rewards for their efforts in games.

Led by heavy hitters like Axie Infinity, My Neighbor Alice, Mines of Dalarnia, and Splinterlands, these games allowed users to cast their achievements — receiving cryptocurrency rewards for completing tasks and progressing through the game.

While many P2E games captured a great deal of attention, few have stood the test of time since a fundamental flaw plagued most — there is no balance between game revenue and player rewards. Indeed, the vast majority of P2E games rewarded players with a fraction of their token emission based on the size of their token stake and the amount of gameplay.

This system led to the meteoric growth of some P2E coins. At peak popularity, players can earn hundreds of dollars each day. However, as competition increased and user acquisition and retention became more complex, most P2E games began to buckle. Some could not sustain attractive rewards in the face of rampant token inflation, and many saw a dramatic departure as their users flocked toward other offerings.

As a result, many play-to-earn games are now among 2022’s biggest losers by price. The top 100 P2E coins/tokens by market capitalization lost an average of 84% since the start of 2022, compared to 60.2% for the top 5 cryptocurrency in India overall market cap. Moreover, of the top 100 most giant play-to-earn games listed on research tools, just one has been in the green since the start of the year.

Once considered an essential part of the DeFi landscape, yield farms have faded into obscurity recently as investors began to favor low-risk returns during the bear market.

Yield farms were prevalent in 2021 as platforms that allowed users to earn rewards on their cryptocurrency deposits in the form of a specific yield token. Many proved to be highly profitable. Though many yield farms are add-ons to larger crypto exchange India platforms like PancakeSwap and SpiritSwap, a slew of standalone yield farms increased in 2021, most of which allowed users to earn rewards by staking LP tokens from popular AMMs.

At peak saturation, hundreds of yield farms were operating across the most popular layer-1 blockchains, with most offering little to no utility for the reward token — aside from a native staking pool with frequently absurdly high APYs. While some of these generated significant hype in their early days, increasing the value of the reward token and potential yield available, almost all standalone yield farms failed to maintain momentum into 2022.

According to FarmScan data, there are still more than 50 yield farms in operation, many of which have unusual or quirky names that speak volumes about the platform’s quality — for example, cabbage cash, olive cash, and pearl finance, to name a few. As one might expect, most yield farms have seen the value of their reward coins plummet due to a lack of utility, excess supply, and limited buy pressure. It is not uncommon to see yield farm tokens that have dropped by more than 99.5% from their peak.

Launchpads became incredibly popular among the old and new hands in the cryptocurrency exchange India. In the early day of launchpads, achieving 10000 returns on many projects within a few hours was not usual.

As months passed, a storm of projects flooded the scene in search of easy funding. It was secure both in financing and a great deal of exposure. It initially increased competition among the launchpads and led to a tectonic shift in how public sales are handled.

However, as the months passed, an avalanche of low-quality projects flooded the scene in search of quick cash. This significantly increased competition among launchpads, resulting in a seismic shift in how public sales were handled. In the absence of significant demand, some projects began to impose stringent vesting schedules on public participants, resulting in a highly inflated supply and long-term price suppression.

In 2021, only a week went by with a new launchpad appearing on the scene. Many of these struggled to compete for an increasingly low-quality pool of potential public stage projects, and only a few could keep attractive returns well into 2022.

There are now nearly 100 different launchpads in operation, all competing for the dwindling number of projects that are either strong enough to succeed in a bear market or appealing sufficient to secure public funding. According to CryptoRank data, many launchpads now have a negative average ROI for their projects, including Polkastarter, Seedify, and OccamRazer, which have each produced an average of negative 30% for investors.

The launchpad scene is now a three-horse race, with DAO Maker, BSCPad, and Launchpool among the few platforms that have consistently provided net positive returns in recent months. However, according to CryptoRank data, even these platforms still need to match their previous performance.

Can They Make a Comeback?

The cryptocurrency India buy market is a volatile place. Projects with no chance of success can sometimes reach astronomical heights, whereas those with good products must frequently take the difficult road to success.

As a result, determining whether a particular project or trend has the long-term potential can be difficult.

Because rewards are not directly tied to platform revenue, the play-to-earn model has proven to be largely unsustainable in its current form. Instead, the amount of money (and sometimes time) that players invest in the game determines how much they earn, whereas the token’s price rarely finds a support level due to a lack of utility.

Last but not least, yield farms offer an extremely appealing value proposition. Still, their frequently lax security and lack of reward token value support have undoubtedly harmed their reputation among investors. Nonetheless, several platforms have demonstrated that, when done correctly, yield farms can provide an additional source of utility for token holders. However, unless rewards are maintained at a reasonable APY, and the reward token remains in demand, users can expect their yields to dwindle over time, negatively affecting the risk/reward ratio.

Yield farms will likely regain popularity in the coming years, with a greater emphasis on security, utility, and sustainability.