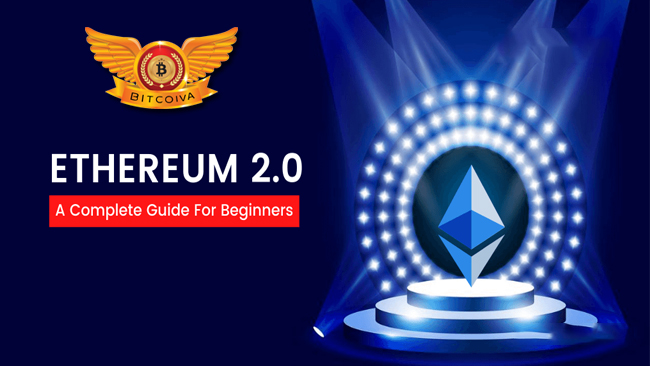 ETHEREUM 2.0 is a worldwide, decentralized open-source blockchain that supports smart contracts. With Ethereum, one can develop code that controls digital currency, executes exactly as designed, and is globally accessible. Ethereum has gone through four significant upgrades since its public main net debut in July 2015.

Homestead debuted in March 2016, Metropolis Byzantium debuted in October 2017. Metropolis Constantinople debuted in February 2019, and Istanbul debuted in December 2019. It is currently preparing to migrate from its previous version to its new version. Ethereum 2.0, as part of its ongoing efforts.

Anyone who has followed Ethereum over the years is familiar with its history of unfulfilled promises, missing deadlines, and sporadic communication regarding future intentions. As a result, opponents have labelled Ethereum a “failed experiment”.

ETHEREUM 2.0, also known as Serenity, is an upcoming upgrade in the Ethereum community. That will improve Ethereum’s performance and functionality in a variety of ways. The term “upgrade to Ethereum” is a bit misleading, as ETH 2.0 is a whole distinct project. EHT2 will not only enhance transaction speeds, but also the scalability and programmability of the blockchain itself, without sacrificing security.

The transaction speed of ETH2 is predicted to improve from 15TPS to thousands of TPS. Ethereum’s design is now supported by a PoW consensus. But with its next update, it intends to move to a PoS consensus. This is done in order to make mining more democratic and financially feasible. Miners undertake all of the work and guarantee network security in a PoW method.

In exchange for a transaction fee and a block reward. In contrast, there are no miners in PoS; rather. Fresh ether is created and transactions are validated by validators picked by an algorithm. They protect the network by encrypting their ethers. If a validator violates the rules, his ethers are sliced. This allows the validators to obey the protocol’s rules.

Ethereum developers are ecstatic about the prospect of making significant advancements in the blockchain industry. Nine distinct technical teams are working on ETH2. The Ethereum Foundation and the Ethereum community finance these teams. These teams are in charge of creating various types of clients that connect to the Ethereum network. Different clients are designed for certain use cases; for example, one is suited for smartphones while the other is designed for huge corporations. The ETH2 teams are, without a doubt, the most experienced and capable protocol designers in the market.

Ethereum 2.0 and Its Substantial Phases

The current Ethereum upgrade is all about re-engineering the whole Ethereum platform in order to create a new, more scalable version. It was anticipated to debut in the summers of 2020 and to operate all three stages the following year. Now, let’s go over these three steps to better comprehend Eth 2.0.

Phase 0 is known as the ‘beacon chain’. The goal was to use this as a “command and control” centre for the ETH2.0 network. The Beacon chain became online in April 2020 on the sapphire testnet. In June, the Onyx testnet was launched, and by the end of the month, it had 20,000 validators. The Altona testnet is currently being utilised by the developers. The official public testnet will be available on August 4, 2020.

The beacon chain’s goal was to arrange validators and allocate them to distinct shard chains. The transactions will be handled for a period of time by a shard chain before being randomly shifted to another shard. As a result, to put it simply, when completed, it will include the foundations of PoS into the system. The existing PoW Ethereum blockchain will remain operational. Because it is in its early stages, it will be unable to host dApps, execute smart contracts, or process transactions.

Phase 1 will incorporate shard chains (a scalability solution), resulting in the Ethereum blockchain being partitioned into 64 distinct chains. Such chains will therefore be able to run in parallel with one another and effortlessly interoperate. Then, not every node in the network will be required to process and validate every transaction. Instead, the transactions will be separated into several categories inside the blockchain.

It is crucial to remember that, for the time being, PoW Ethereum can only process one sequential block at a time. However, with the introduction of shard chains in Phase 1, Ethereum can now execute several transactions at the same time. This parallel processing will boost transaction rates from tens to thousands, and maybe tens of thousands, per second.

The goal of Phase 1.5 is to merge the previous PoW Ethereum with the new PoS chain, which means users will be able to utilise their ETH on the most recent Ethereum version, i.e., 2.0, with no extra work or risk of their ETH becoming obsolete. ETH1 will appear as its own shard on the network at initially, but will gradually be changed into an execution environment in phase 2.0.

ETH 2.0 is less specified than previous versions of Ethereum. Ethereum 2.0 is scheduled to arrive in 2021 or 2022 to decentralise and speed up the network, while no specific date has been specified as it is currently in the research and development stage. There is still a lot of work to be done on ETH2.0 before it can be fully operational, and it will take a long time to implement.

However, it is anticipated that phase 2 will permit the processing of transactions, the execution of smart contracts, and the hosting of decentralised apps (dApps). This phase will serve as a feature for creating execution environments that can imitate the protocols of another blockchain, such as Bitcoin or Zcash. ETH2 is designed to build on ETH1 by redefining the fundamental nature of the blockchain itself, much as ETH1 built on the protocol of Bitcoin to offer us the power of smart contracts. We anticipate a plug-and-play set of algorithms, similar to that of Hyperledger.

Differentiations between Eth 1.0 and Eth 2.0

Eth 1.0 and ETH 2.0 differ in a variety of ways. The adoption of Proof of Stake (PoS) and the addition of Shard Chains make ETH 2.0 more efficient than its predecessor.

Proof-of-Stake- Unlike PoW, which uses actual computing power (also known as miners) and electricity to create blocks on the blockchain, PoS uses validators (virtual miners) and ether deposits. As a result, there will be increased security, scalability, and energy efficiency.

Shard Chains- The second enhancement in Eth 2.0 is Shard Chains. As previously stated, shard chains are a scalability technique that tries to increase the throughput of the Ethereum blockchain by allowing transactions to be processed in parallel rather than sequentially. This is in contrast to Eth 1.0, which employs a single chain, which has an impact on the ability to execute transactions rapidly.

The beacon chain and PoS validation on the testnet

The first phase of shipping is anticipated for 2021.

Launches shard chains, but no real-world transactions are processed on the chain.

ETH1 might be merged into ETH2 as a new shard.

As an execution environment, ETH1 merges into ETH2 to enable transaction processing on the shards.

Vitalik Buterin, a Russian-Canadian program and writer best known as the co-founder of Ethereum and Bitcoin Magazine, stated that “existing apps would continue to function as usual. Account balances, contract code, and contract storage (including ERC20 balances, active CDPs, and so forth) will all be carried over”.

To summaries, Ethereum 1.0 will remain in its current form while being improved to become an Ethereum 2.0 shard in the future. The release of Eth 2.0 will create new opportunities for the Ethereum community and Ethereum developers.