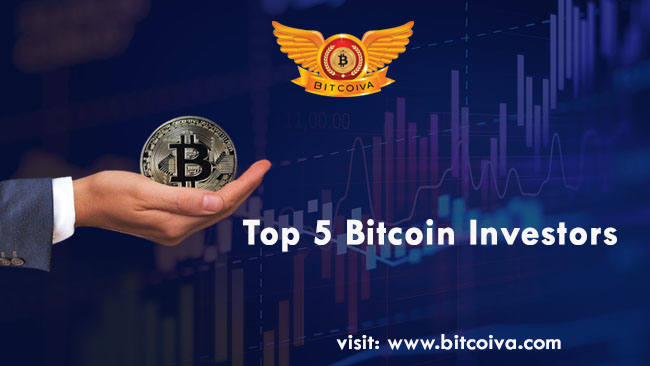 Bitcoin is the most valuable blockchain-based digital asset, with a market worth of $896.7 billion as of December 2021. It has a large fan base among cryptocurrency enthusiasts and speculative investors. Several wealthy business owners and entrepreneurs have invested much in this digital asset. The top Bitcoin investors are listed below, according to financial statistics and media outlets.

Other portfolio firms include Genesis, a liquidity provider (a company that funds a pool with bitcoin) for over-the-counter cryptocurrency buyers and sellers. Grayscale Investments, which owns Digital Currency Group, manages the Bitcoin Investment Trust (GBTC), an investment vehicle that holds 654,600 bitcoin and provides investors with exposure to price fluctuations.

Michael Saylor, co-founder and CEO of business analytics firm MicroStrategy, believes that cryptocurrencies will be the next major investment. MicroStrategy increased their bitcoin holdings in December 2021 by purchasing 1,434 bitcoins for around $84 million. The corporation has a total of 122,478 bitcoins.

Cameron and Tyler Winklevoss own a variety of cryptocurrencies and blockchain-related companies, including the privately owned Gemini exchange. They are expected to be the first to become billionaires through bitcoin investment, with an estimated 100,000 coins worth $4.8 billion as of December 2021.

The Winklevoss twins created the Gemini exchange in 2015. The company allows investors to buy, sell, and hold digital assets. Gemini launched bitcoin futures on the Chicago Board Options Exchange in December 2017. (CBOE).

In addition to bitcoin, the brothers are heavily invested in Ethereum, but their exact holdings have not been publicised.

Tesla’s CEO and co-founder is Elon Musk (and other companies). Tesla designs and manufactures electric automobiles and renewable energy products. Tesla, being an inventive firm at the forefront of technology, could be expected to possess cryptocurrency—Tesla acquired $1.5 billion in bitcoin in 2021 in order to begin accepting it as a means of payment.

Former Fortress Investment Group hedge fund manager and Goldman Sachs partner Michael Novogratz is a frequent commentator on bitcoin price movement. He is the founder, CEO, and chair of Galaxy Digital Holdings, a broker-dealer that provides a comprehensive suite of blockchain-related asset services.

Galaxy Digital specialises on digital assets; in the third quarter of 2021, it spent $62 million on non-fungible token (NFT) start-ups. NFTs are digital assets that use blockchain technology to safeguard and track ownership. They rose to fame in 2021, when NFT-protected digital art began selling for millions of dollars.